One side effect of extreme heat is that sometimes you have to have a bit of downtime away from it, preferably with a little light air conditioning, a comfy sofa and some decent TV. Decent TV in Australia however, is difficult, if not impossible to achieve, unless you like 15 year old episodes of Heartbeat. The battle for the leadership of the Australian Labour party was going on while I was there, and there was wall to wall coverage of Julia Gillard the new prime minister, trading insults with Kevin Rudd, the old prime minister There was no reference to policy much, just a lot of insults. And this went on for days and days and days. Julia Gillard, the victor in this spat incidentally, was born in Barry in Wales. Not born as Barry, please note.

Julia was born in Wales

I had to find something else to watch and thus accidentally became fascinated by ‘Pop Asia’ an Eastern music channel for the Southern hemisphere. Baby faced Korean and Japanese pre pubescent boy and girl bands (they are only distinguishable by their outfits as they have the same androgenous shape and faces) were aping our Western boy and girl bands in a slavish and highly stylised way. They were so perfect, so pretty they almost look like cartoons. They make Take That look like Black Sabbath after an all night bender.

The biggest ‘boy’ band on the block is ‘Big Bang’ who with their black hair bleached Billy Idol style for one particularly popular video were heavily featured  singing ‘I’ll be back’ (from where they didn’t say) Most of the songs are in Korean but they usually have one word or phrase in English which they repeat a lot. Another highly talented young man with a lot of eye makeup on was called ‘2pm’ – why not two thirty we ask?
Other artists were called things like ‘Orange Caramel’  I wondered if any other Quality Street flavours would be featured later. Praline Surprise perhaps.  Dubai or not to buy 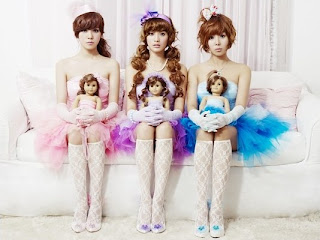