I receive my induction chat along with the other new volunteers at the Fauna Rescue centre in Malaga (pronounced Ma –LA -ga) Western Australia, just North of Perth. 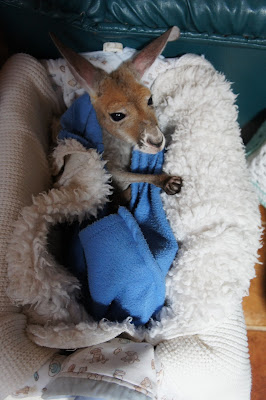 Jackie, our very friendly volunteer co-ordinator has warned us about the venomous snakes – mainly Tiger snakes – and to look out for them at all times. If we do 50 hours volunteers get free passes to all Perth’s parks and gardens which is a nice support gesture from the local government guys who also provide the land for the centre FOC. Jackie has recently progressed to a part time paid position here as volunteer co-ordinator after a mere seventeen years of unpaid work. She is doing a sterling job.

After a tour of the animals in for rehab at the moment I was put on food prep duty. Each animal has a menu on the wall with a square indicating the size of the chunks of food each species can eat. You then need to locate the meal components for each species which could be anything from beetroot to peppermint branches, chop it up and assemble a corresponding bowl of appropriate dinner for feeding time.

Luckily, chopping up fruit and veg with a blunt knife is something I’ve been doing for years at home and I was certain that I must excel at this task.
In the afternoon, I did a bit of computer support and helped to edit some of NAR’s educational leaflets, I felt my standing had improved and I was given a brush tailed Possum called Peppi to cuddle as a reward. He was unfazed by the attention as he peeped out from his pillow case. Most of the animals here are wild and are hopefully to be re -released  so only a few can actually be handled at all, which is a bit of a blow. 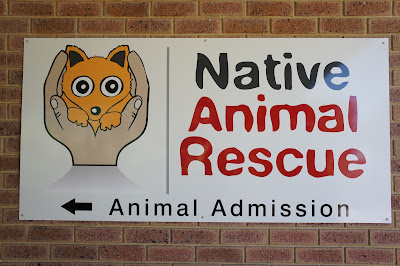 Two admissions this afternoon. A Bobtail which is a kind of fat tailed Iguana which some kid’s dog had found in the yard. He was fine and was given the once over and released. Next a number 28 – this is a kind of very pretty multi-coloured native parrot which is actually called a ‘number 28’. I wondered if there was a reason for this numerical description or whether it simply shows a distinct lack of imagination on the part of the parrot discoverer. This parrot was sick as, well, a parrot, suffering from something called ‘beak and feather’ which apparently is more or less game over for any bird unfortunate enough to develop this condition.
I watched Kelli the veternary nurse, feeding a baby Woylie (a type of endangered mini kangaroo) with a small tube of milk. He had fallen out of his mum’s pouch and was looking very scared and very cute. A reunion was to be attempted later.

One of the young volunteers, Daniel, had gone awol without permission which is not allowed in the reserve. It turned out he’d gone home in a huff because someone had advised him how to improve his sweeping up technique. You have to be careful how you give domestic guidance to the male of the species… Can you catch a cockatoo?

Get An Accidental English Tourist delivered by email