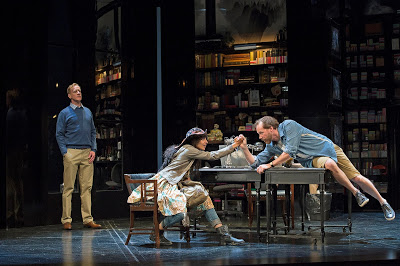 The theatrical smorgasbord that is the SHAW festival continued in the historic town of Niagara on the Lake. The SHAW version of Pygmalion was up next. Perhaps George Bernard Shaw’s most iconic and popular play. The talk beforehand gave some explanation to the modern twist on the story taken by this production.

In days gone by, your accent very much determined your class. Accentism – which judges someone by how they speak, although less prevalent today, is still alive and well.

Pygmalion is very much a social commentary on that fact. How you speak showed where you came from. It defined what you did (or didn’t do) and very often how much money you had.

Received pronunciation (RP) is the only accent in the UK that is linked to class and education and not to geography. Class we are told is more fluid today and yet we have less social mobility in the UK than in many previous decades. Shaw’s play masks his scathing observations on the reality of what these divisions meant for people. The term ‘romantic comedy’ is very ironic.

Professor of phonetics Henry Higgins makes a bet that he can train a Cockney flower girl, to pass for a duchess at an ambassador’s garden party. He does this by teaching Eliza Dolittle to assume a veneer of gentility. The most important element of which, he believes, is impeccable speech. The play is a sharp lampoon of the rigid British class system of the day, and a commentary on women’s independence.

The Shaw festival prides itself on the accents of its talented ensemble and I have to say that by and large they are pretty good at them. English accents can be tricky (even for the English!) This production, is set in a more contemporary time. Eliza Dolittle ( Harveen Sandhu) is an Asian girl.

Eliza has abandoned the straight cockney accent for something dubbed Multicultural London English. London is indeed a melting pot of cultures and accents today. I’m pretty sure that true blue cockneys aren’t quite yet extinct. However, Eliza’s wandering vowels emerged as a weird hybrid accent I’m not quite sure actually exists anywhere!

The rain in Spain stays mainly on the plain!

That aside, the production has a fabulous set (as always) and I very much enjoyed the performance of Patrick McManus as Professor Higgins. His autistic thirst for knowledge and school boy enthusiasm supercedes any trace of emotional intelligence. I liked the use of video and multi media which gave it a modern twist. The costumes are fabulous – as they always are at the SHAW.

Talking of having a plum in your mouth, Niagara on the lake is awash with farms growing mouth watering plums. They are piled up at the side of the road at this time of year as its harvest time.

Just as mouth watering was our delightful afternoon tea at the grand Prince of Wales Hotel. It is in the middle of town, just a stone’s throw from the Shaw Festival Theatre. This hotel, right in the centre of Niagara on the lake, was named in honour of the son of Edward V. He visited on his Canadian tour in 1901. He later abdicated the throne as Edward VIII.

The luxurious late Victorian splendour has been carefully retained. Any fans of Downton Abbey will be in seventh heaven.

The service  is exceptional. The sandwiches, warm lavender raisin scones and soft baby lemon meringues were delicious. My Blood Orange Oolong tea was fragrant and hot. It was served in a beautiful old tea service. The occasion was topped off with a spot of sparkling champagne.

Niagara-on-the-Lake teems with historical plaques, and is also a designated National Historic Site of Canada. Its accolades include the province’s first newspaper, lending library, parliament, historical museum, and governing body for the legal profession.

As well as important battles, the town also gave many black Americans their first taste of freedom. As a stop on the so called ‘underground railroad’  for those travelling further into Upper Canada, and as a refuge in its own right. The Underground Railroad, was a vast network of people who helped fugitive slaves escape to the North and to Canada.

The main street is awash with Regency and Classical Revival buildings, considered the best in the country and it is really like stepping back in time in a very good way. Afternoon tea at the Prince of Wales followed by an evening with a delightful thespian creation from the Shaw festival – what’s not to like?