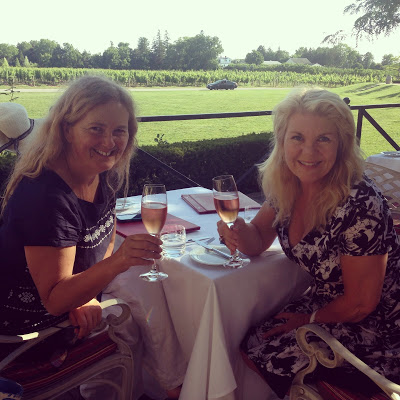 SHAW festival – Niagara on the Lake

The exceptional SHAW theatre festival at Niagara on the Lake in Ontario Canada begins again. I’ve been to this lovely place four times now and its starting to feel like home.

Some say its the prettiest town in Canada, and while I don’t have many other towns in Canada to compare it with, I think it must be a pretty safe bet.  The beautiful painted wooden houses with coloured shutters and stunning gardens are for starters. They nestle next to the huge glittering, glacial lake Ontario. It is so large it seems like the sea. The giant white Hydrangeas are a highlight.

The skyline of bustling Toronto can be seen in the distance on a clear day. The green-blue Nigara river winds its way from the lake down to the great spectacle of the Niagara Falls.

One of the greatest natural wonders of the world. It is certainly among the most photographed. Winston Churchill called the drive from the lake to the falls ‘the prettiest Sunday afternoon drive in the world’

Niagara on the Lake

Niagara on the lake still has a small town community feel to it, an increasing rarity in this modern world.  It seems like something of a lost-in-time chocolate box  place. It is in fact a site of great historical significance.

The Canadians fought fiercely here on the side on the British against America in 1812. The location was the site of many battles. Hundreds of soldiers lost their lives on this verdant soil.

The Niagara escarpment has its own micro climate. It feels particularly tropical in the summer and a little less harsh in the winter.

This makes it ideal for growing fruit. The place is abundant with cherries, peaches, plums and apricots at this time of year.

Since the 1970’s it has also become a very successful wine region. It grows familiar grape varieties, with locals now making their own Canadian wine. Canadian making is improving.

You can also dine at one of the gorgeous vineyards. Dinner at the Peller vineyard on a beautiful summer evening overlooking the vines is a delightful experience. A beautiful restaurant, gorgeous food – I had the lobster – first class service, and a view to die for.

We watched the sun sink over the rows of vines creating lines of lengthening shadows. I even braved the Prince Edward Island oyster which arrived with an ice wine gele as an ‘amuse bouche.’ It tasted a lot better than it looked with the added bonus that my zinc consumption for the day was boosted.

We  headed to the SHAW festival theatre for that night’s performance of the musical Sweet Charity. First though, we just had to raid the SHAWP (Shaw Shop) and buy some merchandise. It’s a super shop and I can never resist a good fridge magnet.

Sweet Charity is one of my favourite musicals and I know it very well from the Shirley Maclaine film. I love this show and was excited to see it on stage for the first time.

I wasn’t disappointed. From the top class live music to the stunning sets, colourful costumes and clever choreography this was a stunning production.

Julie Martell worked her butt off as Charity Hope Valentine.  You do need some stamina to sing and dance at the same time over any length of time.

She was convincing as Charity with her joie de vivre and eternal belief that love would save her from her dubious life. The dance numbers were exhilarating. We loved  The Rhythm of Life, Big Spender and If My Friends Could See Me Now – fantastic!

It was a cracking show and a visual and audible treat. I could easily have watched it again the next night.

Sweet Charity doesn’t really have a happy ending but it is finally about the triumph of hope over experience. Canada is a long way from the UK where I live, but Sweet Charity was definitely worth the trip.

More about the SHAW festival