Historically, the South of Slovakia was a huge area for wine making. There used to be over 300 wine cellars in this area of the country alone! There are a lot fewer vineyards than before, but Slovakian wine is still very much in production.  I was very keen to see how Slovakian wine compared, as I have tasted wines in many other countries around the world. Although Slovakian wine is popular domestically and in neighbouring countries, it  is not well known internationally.

Staying as a guest of the Lisov museum in the Hont area of this small country, we were able to sample some of the local wine. Jakub from the museum makes his own wine called ‘Lisovino!’ I confess I drank a fair amount of this cheeky little white wine during my stay, and it was very palatable indeed! The white wine was made from the pesecha leahka grape variety.

The red was good too, although I’m not a red wine drinker myself, I always have a taste! Jakub also produces a traditional Slovakian young wine/grape juice drink called Burciak which is less alcoholic but increases in strength as time goes by!

We headed out for wine tasting at some other cellars elsewhere in the countryside. Stará hora Sebechleby, is a village up on the southern edge of the Štiavnické Hills. It is a wine-growing settlement, included in the list of monuments of folk architecture in Slovakia.

Stara Hora is a special village because of the number of wine cellars here dug by hand into the tufa bedrock. You can pay a few dollars to try wine at a whole variety of them! We tasted some very unique wine here. Wild berry fruits are the base for some of the wines. Other vintages are quite full bodied and mature. A number of traditional grape varieties are used in Slovakia which aren’t grown anywhere else. This makes the wine particularly unique.

The wine making industry used to employ thousands of people. Now it’s only a few hundred. The sunny weather and the soil conditions make this a great growing environment. There is most definitely room for the Slovakian wine business to grow. I bought a litre of local wine in the supermarket for only 2 Euros. It was as nice as anything we’d buy in the UK, for three times the price!

As well as wine cellars, tufa has been carved into cave houses. Tens of tufa cave houses can be found in the hilly countryside near the museum. This part of Slovakia is set in the base of an ancient volcano (caldera) and so there is plenty of tufa about.These houses were inhabited by local people for many years.  Tufa is a light volcanic rock, which is actually solidified lava. This makes it easy to carve into houses and wine cellars! We call tufa pumice.

Living in the cave houses was discouraged under communism. The Russians wanted people together in communal settlements and farms where they could keep an eye on them!  In the 1970’s, concrete houses were built here to resettle Russians who had been affected by the Chernobyl disaster. Maybe it is  time for the cave houses to come back into their own once more! 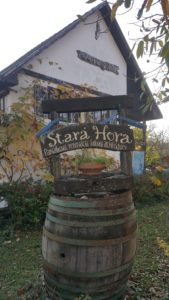