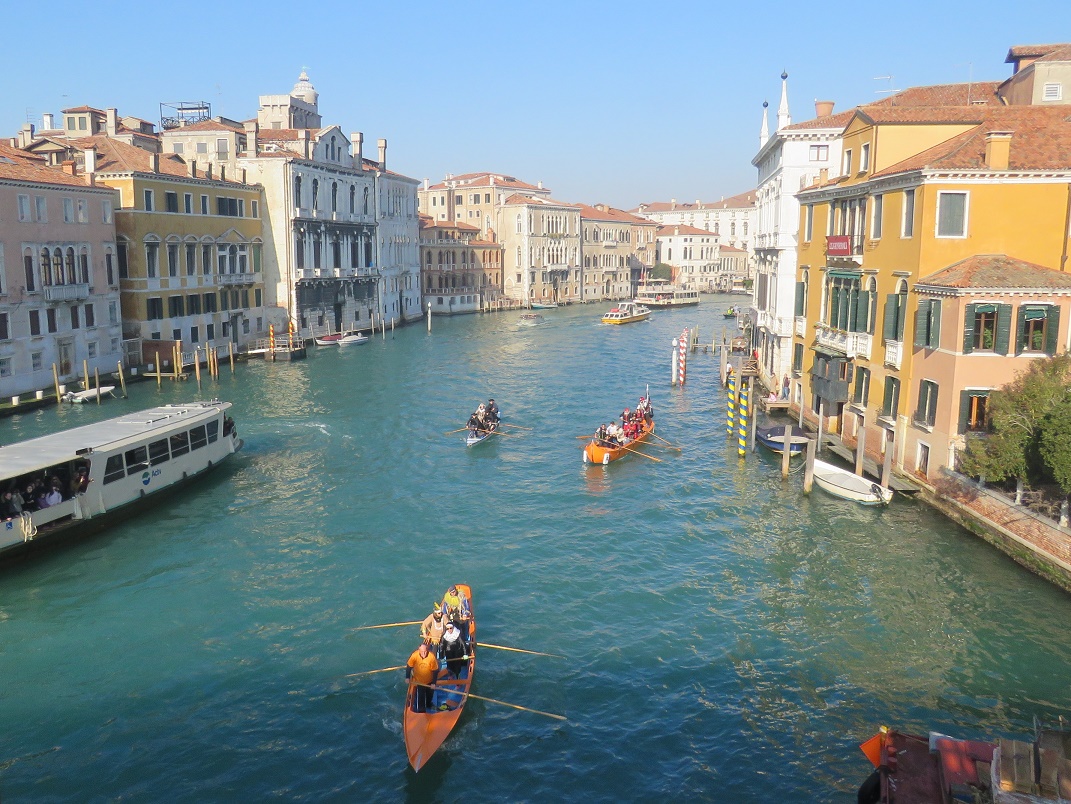 The venice carnival – what’s it all about?

The Venice carnival is the most famous of the city’s many celebrations. It lights up the city for weeks with spectacular parties, international artists, shows, dance and music. It’s a real showcase for the city, and heralds the first early wave of tourist crowds.

On the first weekend the Venice Water Parade happens on the grand canal. Everyone and anyone who can row venetian style, or paddle their own canoe takes part in this fancy dress boat parade. The parade starts at San Marco square but I knew this would be too crowded to see much, so I made my way to the next bridge over the grand canal.

Water under the bridge

The wooden Academia bridge crosses the grand canal further up but is well before the famous Rialto bridge. I was there an hour early and it was already packed with people.  I couldn’t get a spot facing in the direction of the start of the parade at St Marc’s square without a serious amount of elbowing. Instead I managed to get a spot looking up the canal and was able to see all the boats heading down to the start.

The sun was shining and the crowd really friendly – there was a sort of mardi gras atmosphere. All the rowers had taken the fancy dress challenge very seriously. There were sumo wrestlers, pixies, princesses, carnival characters, chickens, Indians (but no cowboys,) pirates, a fruit family, and a dragon boat load of pink ladies. There was Batman, Robin, the Joker, and Cat woman, a team of surgeons in medical scrubs, some convicts being pursued by a policeman and a whole boat of Super Mario Brothers!

To watch the parade I went under the bridge and climbed onto a floating dock with some steps right in the water.  A lot of people ended up on that small floating platform, but happily no one fell in.

From my spot I could see the first main boat process towards me. It was full of musicians and men doing operatic Italian singing. I wasn’t sure about the singing.  Then a barge with a giant model of a rat came by – was it leaving a sinking ship? Venice a city of canals, is also inevitably a city of rats. It was a glorious morning and a lot of fun to see.

The opening weekend of the  Venice carnival.

The carnival launch party takes place on the first Saturday evening of the carnival. It’s in the rio di cannaregio area near the jewish ghetto. Beautiful images were projected onto the ancient buildings, the most stunning of which was the magical lady in the moon.

Artists did their thing on barges moving up the river. This is the weekend that the tourists really start to flood into the city. People to dress up in earnest with masks and elaborate costumes. I met quite a few of them wandering along.

History of the Venice carnival

The Carnival, is actually a pre-Lent festival, the word means ‘farewell to meat’ and is celebrated throughout Italy. It was first held in Venice in the 11th century and consisted of over two months of revelry, until it fell into decline during the 18th century. After a long absence, the Carnival returned in 1979. The Government decided to bring back the history and culture of Venice, and wanted to use the traditional Carnival as the vehicle for its efforts and it worked! Now the carnival attracts about  3 million visitors every year!

Venetian masks are a centuries-old tradition of Venice. The masks are typically worn during the city of Venice Carnival, but were used historically on many other occasions in the past. Masks were usually a device for hiding the wearer’s identity and social status. After all you can be whoever you want to be in a mask, and do whatever you want with whomever you like! Theoretically.

The mask tradition played a part in Venice’s rather hedonistic reputation in the 18th century and were used regularly to conceal the dubious activities of the wearer. The masks were eventually banned by law – except at carnival time! The most exclusive and expensive of the Venice carnival events are the lavish masquerade balls. These masked balls are held in some of the most beautiful palaces of the city and recreate the mystery and magic of venice in its heyday! I’m not sure I’ll get to one of those but there are lots of free events that everyone can enjoy.