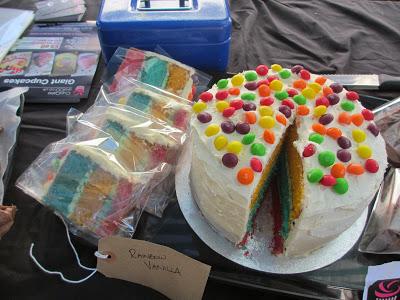 It was the ninth Alnwick Food Festival. A market place bustling, and full of stalls selling fresh local produce is a real treat. Celebrity chef Jean Christophe Novelli was there putting the passion into cooking, with his live demonstrations.

Festival organiser Karen Larkin, has been the brains of the operation for the past few years. She took over from her father who started the festival back in 2004. The original idea was to put something together which would help local farmers and food producers who had been badly hit by the outbreak of foot and mouth in 2002.

‘My Dad’s vision’ she explained ‘was to provide an opportunity for farmers to diversify and get back into profit. He wanted it to showcase goods made in Northumberland, to help boost the local economy and to extend the tourist season here.’ Karen joked that she had worked 130 hours in the week leading up to the festival but only got paid for 20!

‘I love doing this, I can’t let it go and it’s brilliant for the town.’ A small entrepreneurial set up, the Alnwick Food Festival is a company in its own right is going from strength to strength. New partners are coming on board every year.

The Alnwick Garden were providing a guerrilla kitchen courtesy of the their own branch of Jamie Olivers’s Ministry of Food Their mini one cup fruit pancakes were a real treat. They were plugging their Christmas Food Fayre coming up too with a couple of giant promotional elves.

Lots of chocolate, artisan breads, local ales and  spirits are on offer. Multiple types of pies and game are on offer.  One of the themes for this year was street food. I tried the Chicken Jalfrezzi Dosa from the Sachins stall and it was delicious.

Jean Christophe Novelli told me about his connection with the festival. His infectious enthusiasm was 100% genuine. He explained that he traveled all over the world to food festivals and that Alnwick had great fresh produce for him to work with. ‘These are top class people who are on the ball’ he said.

Jean Christophe praised local chef David Kennedy and the meal he had prepared for them all at the Alnwick Town Hall the night before. ‘He worked like a Japanese prisoner of war!’ he exclaimed ‘I eat in the best restaurants all over the world and that food was as good as any of them!’

Jean Christophe praised local ice cream maker Spurelli as worthy of 3 Michelin stars and even said the quality of food was much better than at the Dubai Taste festival. He had been asked to work with sub standard scallops from New Zealand. ‘What do you want me to do with them, make them into soup? Why don’t you get them from Scotland?’ he told the Arabs apparently.

A great character, a great chef and a great ambassador for the Food Festival.

From Coronation Street to cheese making

Sean Wilson, Coronation Street’s Martin Platt, is now an award winning cheese maker. He was there again  after missing last year’s festival because he was ‘on tour’ with his cheese. He does a lovely crumbly Lancashire. Gail would love it.

Durham Venison and Game were there with a selection of fresh meats from the wild. Where do you get this from I asked? The venison is from Alnwick and the rabbit is from Durham he said. We employ stalkers to shoot it and we sell it, he explained. So now you know. I did buy some venison burgers I admit as I love the lean clean taste of it so much nicer than any supermarket stuff full of water and chemical additives..

It’s  great weekend for foodies and for those promoting Alnwick and the beautiful county of Northumberland. I will definitely be back there for the 10th anniversary of this lovely local event.

More about the Alnwick Food Festival