The Bank Holiday weekend was a mixed bag of weather but we did have some glorious, rare and much welcome sunshine for our Cumbrian trip out. Aughill castle is a real Eccentric England venue. Built in 1837 by John Bagot Pearson, a solicitor from Kirby Lonsdale as a rich man’s folly for entertaining, it was modelled on the much larger Lowther castle near Penrith. Its gothic revival turrets and tower are the sort much loved by Victorians. In 1919 it was up for sale in Country Life for £7,700. The current owners, Simon and Wendy Bennet, who originally ran a restaurant in Mayfair bought it sixteen years ago and paid less for it than a three bedroom house in London at the time would cost. Of course it was in a bit of a state then and has had various incarnations throughout its life including being divided up into holiday flats. Nowadays after loving restoration this castle is a quirky as it gets. You can stay in the Pendragon room in a four poster bed, watch a movie in the castle’s own mini cinema or borrow a dog to take for a walk… 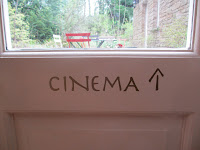 Next stop was Brougham Hall where some fearsome Vikings had invaded  the castle walls (there are a lot of castles round here) The battle re enactment was courtesy of the University of Cumbria and was great fun. ‘I want your land your goods and your life!’ Vandred the Merciless was heard to cry (aka Sean Robinson) as he led his fellow Vikings into the fray.

The kids were having a great time too as they got to see the authentic combat and weapons displays and try out their own fighting skills, hand to hand, with their hairy adversaries.These Cumbrian Vikings were certainly the most friendly and approachable marauders I’ve ever come across and one of them was even a girl!
Just lately, I observed an interesting new sign at the approach to a small village in the countryside. A warning drivers who may be sailing unaware down a bit of a back alley that they should engage their brains and not take any notice of their sat nav as they could get stuck like a pig in a passage. I still haven’t got into the sat nav cult  – I can’t bear that sanctimonious woman issuing orders, however politely and ordering a u turn when she thinks you’ve gone the wrong way.

We then  called in to Abbot Lodge, a working dairy farm which produces over 40 flavours of homemade Jersey ice cream. The curious calves were very tame and very cute and were certainly not camera shy.
The day was finished off with a walk across the fields in late sunshine on the edge of  the Lake District. Not many people around in this, less popular part of Cumbria, but lots of sheep, their new lambs and a whole wide vista of spectacular English countryside.