The Ghostfest evening at Newcastle Castle is a very unique way to spend a Saturday night! We went along with an open mind to this incredible venue to watch a  spooky film, and to meet the Spiritus Paranormal Investigator team. I love the castle keep. It’s so historic and quite beautiful inside. It has lots of nooks and crannies and sets of winding stairs everywhere. It also has a really nice vibe and is always staffed by friendly staff and volunteers.

First we watched the 1962 film Carnival of Souls. I’d been to a film showing of Bladerunner at the castle before which I loved. Check out my blog about that here.  In its day the Carnival of Souls would have been a cutting edge movie. The concept of a spirit in purgatory returning temporarily to its mortal life before being brought back to the underworld, is actually pretty creepy. To a modern audience however, the effects are not very scary at all, and the script was rather underwritten I thought in terms of content. A poor man’s Psycho. I am obviously a professional film critic.

We looked forward with anticipation to the second part of the evening. Meeting the real stars of the show – the castle’s own resident spirits! After a break, we were introduced to Spiritus, a local team of traveling paranormal investigators!

Our paranormal investigators were not in the dramatic Derek Acorah mode. They were Wayne, Don, Anthony, Colin and Dennis. Ordinary guys with a passion for the extraordinary. The team are genuinely fascinated by the paranormal, and have dedicated themselves to trying to make this experience accessible to members of the public.  After a general introduction from Don, we moved off in groups to different parts of the castle.

Our first port of call was the chapel. Restored by John Dobson, the famous Newcastle architect, this part of the castle has a vaulted ceiling and beautifully crenelated arches. This is a special place within this ancient structure. Our first group activity was the human pendulum. The group stands in a circle holding hands with someone in the middle. When the spirit is questioned the energy builds up and the person in the middle of the circle is moved forward for a yes answer and back for a no answer. Dominic, our man in the middle starting swaying noticeably backward and forwards, only after a good while.

The spirit that came through seemed to be a soldier who had been stationed in the castle. He was not in a good mood. I started to feel very hot and uncomfortable indeed and had to sit out of the circle. It turned out that I reminded him of his wife who had died which is why he was so sad. I even manage to upset someone who’d been dead for a hundred years! Typical.

GhostFest – the jailor and the Ouja board.

We spent some time on the mezzanine floor next to the old cells of the castle.  A brutal jailor had manifested here on previous visits. In fact manifested so violently, that he had possessed Dennis, one of the team, and made him very aggressive! Dennis had started throwing his precious equipment around and at one point physically attacked his team mate Wayne! Dennis isn’t allowed on the mezzanine anymore.

Later in another hall, we sat round that old favourite for speaking to the dead – the Ouja board. Despite asking about messages from the other side for loved ones, the spirits that came through were not cooperative at all. Even though the planchette did move, it just kept skidding off the board. Towards me incidentally. Later Wayne called for Fred, a rather rude spirit to come through. Fred promptly spelled out some abusive swear words aimed at the paranormal team. He seemed profoundly unimpressed by them.

We loved the GhostFest experience. It was not frightening but quite fascinating and a bond between our group was quickly formed. The group energy is crucial in determining the outcome of this process and I would certainly recommend this experience for the open minded and the curious. It’s also a lot of fun! 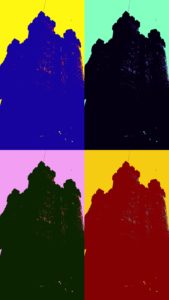 History of the castle

Building work began on The Castle that stands today in 1172 by Henry II and took 5 years to complete. Later, during the reign of Henry III The Black Gate and further outside walls were added outside. The Castle became somewhere of safety for the local townsfolk during attacks from the invading Scots.
Over the following 300 years the castle fell into disrepair. It was brought back to a former glory
In 1643 during The English Civil War.  Sir John Marley started repairing The Castle as The Scots started to advance further south. However in 1644, 40,000 Scottish soldiers besieged the area. The brave garrison of 1,500 men managed to fend off The Scots for 3 months before they were forced to surrender.

Up until the late 18th Century The Castle was then used as a prison. Housing some of the most violent and notorious criminals in what would have been horrendous conditions. Men, women and children would have all been literally thrown into the cells and left to rot in squalor. Some criminals were left chained to the walls for weeks on end while the public could pay 6d to view them for their own entertainment. The Castle became infamous for its horrific conditions whilst its neighbour The Black Gate was the centre for public executions.

There have been numerous ghostly stories told about Castle Keep which range from the sounds of ghostly footsteps on narrow corridors which appear to be empty once investigated to unexplained mists which several visitors have captured on their cameras. Hundreds of photographs have been published both online and in books which have sightings of dark shadows, orbs and mists. Visitors have felt cold spots appear and disappear without any reason and people have been touched by invisible hands.

The Queens Chamber is one of the centre of hauntings at the keep. Many people have reported hearing chanting in the chamber which could be heard echoing around the walls of the Keep. This chanting sound is said to be made by chanting monks. A lady has been seen many times in the chamber, especially in the chapel. Visitors have reported being attacked, scratched and shoved within the walls of Castle Keep.

The Keep’s most famous ghost is called the “Poppy Girl”. Legend has it that she is the ghost of a flower girl who was sent to prison because she owed some people money. While she was in prison, she was raped and beaten to death by the male prisoners. She is often seen on the stairs of the Keep. It is said that when she is nearby, a whiff of flowers is present in the air.

We didn’t witness anything quite so tangible but the spirits will only do what they want to do..

Check out forthcoming events at the castle here