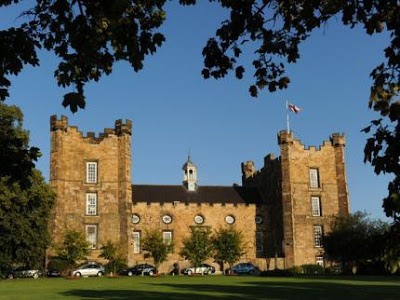 A real medieval castle is home to the Lumley Castle Hotel. It looks over the river Wear in the Durham countryside in the North East of England. It makes an imposing sight as you drive up to the reception past the beautiful golf course and the Chester-le –street cricket ground just off the A1.  The castle is a Grade 1 listed building complete with towers, turrets and a whole lot of history. The hotel hosts medieval banquets, conferences and is an extremely popular wedding venue. It also has the tallest four poster bed in Europe as well as its very own ghost!

Lumley castle takes its name from Sir Ralph Lumley who lived in what was then a manor house, in 1388. Sir Ralph was a well known figure and a brave and popular soldier. He played a key role in the defence of Berwick-on-Tweed in 1388 and led the attack at the Battle of Otterburn in the same year. After being captured and later escaping, he petitioned the bishop of Durham to convert his house into the castle you see today. Sir Ralph next became involved in a failed coup to overthrow Henry VI, and he and his son came to a sticky end and were subsequently executed in 1400.

Lumley Castle Hotel and the House of Scarborough

The Lumley’s wealth was then given by the crown to the Earl of Somerset but as he had no son to inherit, the land and castle were later restored to Sir Ralph’s grandson Thomas, its rightful owner. Thomas Lumley, another outstanding soldier, was appointed constable of Scarbrough castle and the peerage lost by his grandfather was restored to him.

The House of Scarbrough are still the owners of the castle and the present Earl of Scarbrough remains very involved in the running of things today. In 1976 No Ordinary Hotels became the new tenants of Lumley Castle turning it into the unique hotel you see today.

Lumley castle has lots of quirky medieval rooms both within the castle and in the Mews and courtyard areas. Many of the rooms have four poster beds and feature baths. Each room is individually designed and all have full en-suite facilities, flat screen TV, tea and coffee making facilities and wifi. It’s all very olde worlde and there are authentic and antique features everywhere.

You can even stay in the King James Suite which hosts the most enormous 20ft high four-poster Queen Anne Bed! You have to climb up a few stairs to get into it and it is claimed to be the highest one in Europe. Formerly the Chapel of the Castle, it has its own sitting room, en-suite bathroom and Jacuzzi with views over the surrounding parkland.

The castle is surrounded by lovely gardens. A beautiful walled courtyard within the castle is a also for visitors, where you can enjoy any fine weather. You can even try sticking your head into an old pair of wooden stocks in order  to experience some medieval embarrassment.

There are medieval tapestries, suits of armour and fascinating features all over the castle. There is a hall of real marble Roman heads from Italy, of figures like Julius Caesar and Alexandra the Great. They aren’t medieval but the owner liked them so there they are.

The castle is stuffed with beautiful original paintings. These works of art leased from a nearby museum – it is a living castle art gallery. Dinner and breakfast is served in the Black Knight restaurant.

Lumley castle with its picturesque setting is a favourite wedding destination and hosts hundreds of weddings every year. There are several beautiful banqueting rooms you can hire and you can even have a disco in the castle dungeons.

The castle is famous for its Elizabethan banquets. Guests sit at long trestle tables and tuck into five courses with wine and entertainment. You drink mead from a goblet and eat with a knife. Guests sample dishes with medieval sounding names. Things like as ‘Baron’s Borde’ a kind of vegetable soup, and ‘Fyshe with potato’ served in a scallop shell. After dinner there is singing and general revelry for the rest of the evening.

The castle even has its own ghost – said to be that of Lady Lumley wife of Sir Ralph. The ghost’s name is Lily of Lumley.  Lily got into trouble as she followed the Wycliffe religion. This religious choice did not conform to the predominant Catholicism of the time. Local monks from the nearby Finchale Abbey tried to bring her back to Catholicism, but she would not change her mind. Legend has it that the monks then murdered her in one of the bedrooms! They claimed it was to save her soul and then they threw her body down the well in the middle of the castle. Her ghost is said to come back up via the well and haunt the castle. I think if that had happened to me I’d be haunting the place as well!

Lumley Castle really is a one off. It has the cosy feel of a home which it was, but also it retains its medieval atmosphere and has a wealth of historical features and details at every step.

Lumley Castle is actually very easy to get to but yet still remains a bit of a hidden gem. The Castle is undoubtedly one of the finest hotels in Durham and combines old and new to cater for the modern visitor without losing its very unique character.
Standing by the riverside here for 600 years, the magnificent silhouette of Lumley Castle dominates the County Durham landscape as an imposing monument to a bygone age of chivalry and honour.