Allotments are the new must have accessory for the middle classes. Historically they were a sop to the poor who had had their land taken off them during the Agricultural Revolution and were small pieces of land attached to tenant farms. Nowadays you have to be on the waiting list to get an allotment, sometimes for years or you have to wait till some one dies or is convicted of vegetable neglect and evicted.

Allotments came in to their own during the two great wars when food shortages and rationing became the norm. 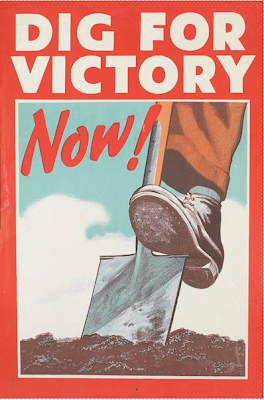 The famous Dig For Victory campaign was an early example of successful government propaganda linking turnip production to success in mortal combat.
A self sufficiency surge was then led in the 1970’s by Tom and Barbara on the BBC in ‘The Good life,’ Although allotments are all the rage at the moment there are fewer and fewer of them as they are often under threat from land grabbers wanting to build starter homes and car parks.
At the very lovely allotments near where I live there is an annual auction of surplus vegetables and flowers which you can participate in if you sidle through the gate in the fence on the right day in late summer.

You can get a giant bag of veg or some stunning Dahlias by bidding just a few pounds and all proceeds go to the Allotments Association.

Of course, fine produce can also end up at the local allotment show where things get really serious in terms of competition. Everyone has heard about rival allotment holders sabotaging each other’s legumes the night before the judgement day. In Yarm, North Yorkshire where my brother has an allotment, the show was well attended this year and there was a dazzling display of fine vegetables despite our pretty pathetic summer. Categories such as best Leek (pot), Best leek (trench) best matched marrows and best vegetable on its own, were in evidence. I am thinking maybe it would sound less lonely as best independent vegetable or perhaps, like those American year books – vegetable most likely to succeed…