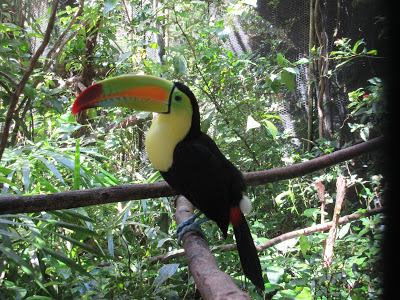 Belize was formerly known as British Honduras. It is a charming and beautiful small country with sparkling seas and precious jungle. Everyone speaks English and the locals are warm and hospitable.

The best and cheapest way to get around on Belize are the colourful public buses. Just being on the bus is a bit of an adventure in Belize. It’s always a lively, friendly rather bumpy ride with an assortment of passengers who look like an advert for the United Colours of Benetton. People selling a variety of snacks are always getting on and off the bus too. It was a tricky manouver for the candy floss man.

Belize Zoo is not a regular type of Zoo, but more of a conservation project, rescuing mistreated and injured animals and educating people about the wildlife of Belize. I knew that if I didn’t go there, then I probably wasn’t going to see a Belizean Jaguar, so we went. The jaguar had the unlikely name of Buddy Junior. He looked unconcerned by our ogling, I guess he was used to it.

We peered into the foliage to try and see the black panther, Lucky Boy. Lucky Boy  was rescued from a small cage in the grounds of a hotel. He was then a bag of mangy bones, hours from death. Well and sleek again now, he could probably see us hiding in his jungle enclosure, but we couldn’t quite see him.

Parrot Nest Lodge is a lovely place to stay in this charming country. It is situated in jungle just outside the village of Bullet Tree Falls, along from the small town of San Ignacio. It’s a family run business and home to Theo and Marcus, and several animals.

Theo, having been born in America, and lived in Majorca, settled here with her family years ago and is still in love with beautiful Belize. There are seven cosy cabins in the jungle and also two super cute tree houses. Hearty home cooked meals are served with the other guests in the charming rustic dining room, open to the wild green jungle. Tea coffee and fresh water are always available too.

Amini, the cook is a former miss West Belize, and has appeared on the famous Belikin beer calendar. She also makes a mean omelet breakfast!  All the staff here are part of the same family and Theo sees them as an extension of her own. She pays to put the youngsters of her employees through high school, which is a luxury here and not free of charge.

When we were here there was quite a bit of rain. It is one of my fondest memories of our trip lying in the cabin listening first to the sounds of the jungle. The tropical rain thundering onto the roof was music to the ears.

This idyllic tropical lodge is surrounded on three sides by the Mopan River, and wildlife are never far away. Belize has incredible bio diversity and there are hundreds of species of birds including some of the most colourful show offs of the bird world, Parrots and Toucans.

Other animals  like Coatimundis, agouti (a bit like a very big rabbit), otters, and the giant green iguana are among the regular visitors to Parrot Nest. Indeed, there are so many iguanas here that they managed to thwart Theo’s recycling efforts. ‘The compost was just full of iguanas,’ she explained.

Theo’s family have long been involved as champions of eco tourism in Belize and her mother Katie Shea Stevens even wrote a fab book about bringing up a family here called PO Belize. Move over Gerald Durrell!

Bullet Tree Falls village, just 3 miles from the Cayo district’s main town of San Ignacio is the last outpost before the great forests to the west, south, and north. From here you can explore all that West Belize has to offer and Theo and Marcus can sort out any tours you may want to do while you’re there. From here is it possible to cross the border to Guatemala and do the world famous Mayan site of Tikal in a day trip which was something we really wanted to do.

Belize – visiting Tikal across the border in Guatemala

Tikal is the ruin of an ancient city, found in a rain forest in Guatemala. It was the capital of a conquest state that became one of the most powerful kingdoms of the ancient Maya. Dating back as far as the 4th Century BC the site was brought to life for us by our fantastic guide .
Mayan native Mr Lewis, guided us expertly around the incredible site. These ancient monumental structures are as staggering a sight as the great pyramids of Giza.
Mr Lewis took my picture in front of them. ‘That’s such a good picture!’ I exclaimed. ‘I have been doing this for thirty five years,’ he replied without missing a beat.
We left Parrot Nest Lodge reluctantly – I would have like to have stayed longer. We boarded the Marlin express bus this time, and set off on yet another marathon overland journey back across the border to Mexico…