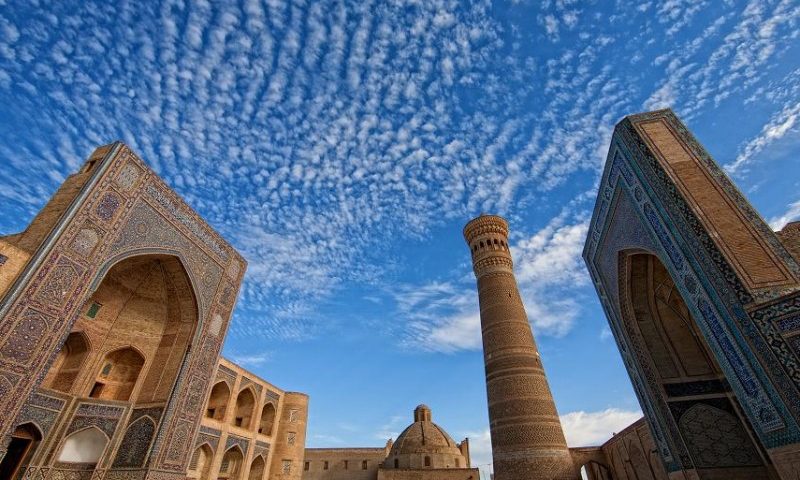 Bukhara – next stop on the silk road

We traveled from Samarkand to Bukhara by train. We climbed aboard the excitingly named SHARQ train. This was not quite like any train I’ve ever been on before.The SHARQ train is a bit like a big living room on wheels. It has a carpet, tables, TVs showing an Uzbek film, and a boiler if you want to make your own tea.

There are also special hooks where you could hang your coat, but as it’s rather hot here now, no one has a coat, so they hang their bread up on them instead. The seats are slightly shabby, armchair comfy. It is definitely different.

We arrived at the Rumi hostel which, although unremarkable from the outside, was very friendly and welcoming on the inside. An airy courtyard where breakfast is eaten and residents socialise, leads through to a small reception. The hostel itself has a surprisingly large number of homely, comfortable rooms.

Much cheaper and more personal than a chain hotel, the bnbs (or hostels) in Uzbekistan have been a really nice surprise. The people here are so friendly and helpful too. Hostels are often family run and a really good choice for accommodation. Great value too.
The Rumi is run by Bekhruz Sadulaeu and his family. His mum Khurshida is a real mother hen to everyone, and Bek and his sister Niloofar both speak good English.

There are Cosy clean rooms, air conditioning and Wifi. There is always plenty to eat, in fact sometimes too much to eat, no one goes hungry! The hostels are also great for meeting up with other travellers and sharing tips and tales. Bek will also sort out trips and taxis to anywhere if you need him to.

Bukhara is a like a living museum in a city with about 140 architectural monuments and is the fifth largest city in Uzbekistan. Bukhara has been inhabited for at least five millenia and the city has existed for at least half that time. An important city on the Silk Road, Bukhara has long served as a centre of trade, learning, culture and religion.

The city is filled with ancient monuments and it seems also to be filled with workman building new ones! Bukhara is expanding. The city has numerous colourful bazaars where souvenirs can be haggled for. You can buy carpets pottery, beautiful cotton and silk clothing. There are gorgeous bags, jewellery and excellent fridge magnets. Everything here is pretty cheap too – it can give India a good run for its money.

Bukhara – how to cool down

It was very hot when we were there in August, in July the temperature had topped forty degrees. We decided to look for a pool to cool ourselves down a bit. We were advised to try the Atlantis Water Park, which had been an old soviet facility. It looked somewhat austere and concretey from the outside.

Inside, it was still a bit soviet, but had been completely refurbished and had a huge indoor and outdoor pool, lovely and clean and was almost empty of people. For a few pounds only, you could have a dip in a great big swimming pool pretty much all by yourself!

An ideal pass time in the 35 degree heat. We also had a massage which was not quite like the massages I have at home. The lady who gave the massage spoke no English and set about taking off her top and then taking my body to task. I was stretched, pummeled, bent in half, pressed in the eyes and had my hair pulled in a rather vigorous manner. It wasn’t quite what I was expecting, and later on I found it it was actually a ‘medical massage.’ Wellness is all.

What to eat in Bukhara

There are lots of places to eat in Bukhara, some better than others. We had a variety of meals from the hazardous (make sure your kebab is cooked through) to the delicious. They do wonderful salads and butternut squash dumplings and we were extremely partial to the garlic plum tomatoes at the Chinar restaurant.

It is definitely worth spending a few days in Bukhara as there is a lot to see here. The historical sites and museums are considerable, as are the retail opportunities. We were happy to spend four of our precious days in this charming city and enjoy the hospitality at the Rumi hostel at the same time!