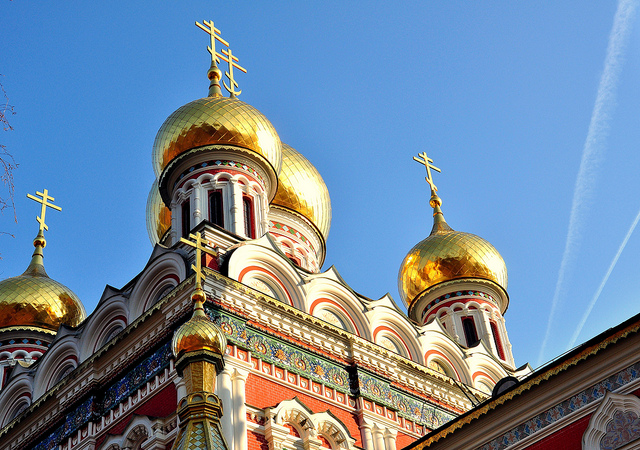 To Bulgaria Sofia, the capital

Bulgaria is a land of constant surprises and, on our overland adventure we were never quite sure what we were going to come across next. We mini-bussed over the Shipka mountain pass with our trusty driver Peppe.

We stop en route at the amazingly beautiful Shipka Monastery. My jaw drops. This incredible building just appears in the middle of the forest with its huge golden domes and pink paintwork. Very Russian Orthodox in style, it was built to commemorate the Russian, Ukranian and Bulgarian soldiers who died in the Russia – Turkish war of 1877. They were fighting for the liberation of Bulgaria.
The church’s bell tower reaches a height of 53 m and its bells, the heaviest of which weighs 12 tons, were cast from the cartridges that were collected after the battles.

It’s a fairytale of a building in a stunning setting. As with so many impressive things we saw in Bulgaria -there was NOBODY there! If this glorious building was in another part of Europe it would be swarming with tourists. Moving on we catch a far away glimpse of strange spaceship-like building, apparently built as a tribute to the communists shortly before their demise.

Three hours from Sofia, in the heart of the Balkan Mountains, a potholed road twists its way up Mount Buzludzha, leading to “Bulgaria’s UFO.”
Rising from the top of the hill, this strange concrete structure can be seen for miles, with its stark appearance.
A red star, the symbol for communism, glares over the valley from the top of its 70-meter-high tower. The expansive, spaceship-like base is straight out of an early science fiction movie.
Officially named the House-Monument of the Bulgarian Communist Party, but it is better known as the “Buzludzha Monument.”  While hundreds of abandoned communist memorials are scattered all over the Balkans, few make quite such a statement.

Our Odyssey continued with a visit to the stone tombs of the Thracian kings. These tombs are quite recent finds, found under a series of Burial mounds in Starosel. At this point in the trip I was more Thracian-ly aware than I had been having heard about their exploits earlier in the week, and so had a much better idea of who this fearsome warrior race had been. I buy a small book at the site entitled ‘Who were the Thracians?’

The burial mounds and their incredible treasures are all pretty new to the outside world. Some have only been unearthed since 2004. The golden masks and crown are just amazing.  The majestic great bronze head with the glaring eyes almost makes you want to become an archeologist yourself.

Dozens of mounds are yet to be excavated. There could be similar precious items underneath them. There’s gold in them there hills. Attached to the side of the South facing tomb – Thracians were sun worshippers – was a giant stone vat which could hold 60 tonnes of wine. The Thracians were big drinkers, there’s no doubt about it. The Thracian king’s giant head had gone to Sofia, but his fine crown of  golden leaves was in the local museum at Hissarya. It is quite a magical find.

We were staying in the Spa town of Hissarya in a strange sort of Eastern Block hotel. A large cohort of elderly, impolite Russian Jews elbowing to the front of the queue and fighting over food at breakfast seem to be the main customers. They were there to bathe in the healing waters of the mineral Spa, presumably to cure their aches and pains. It didn’t seem to be cheering them up much.

The hotel did have a bit of a sanitarium feel to it, with strange masseurs in white coats wandering around and taking people into the ‘underwater massage’ room. It looked a bit scary to me. Shades of ‘One Flew Over the Cuckoos nest.’

In the restaurant the hotel’s Eastern Block menu included a dish entitled ‘The Table Land of the Master Hand’ which we think meant ‘the Chef’s special.’
Back into the the 21st century we stopped at a fabulous Bulgarian boutique winery.  It had an underground party temple where we did some wine tasting and then it was on to our final stop – the capital Sofia. Bulgaria Sofia is a beautiful city which  has lots of stunning buildings of all different styles from different eras. It is also very much less crowded than many capitals.

It seemed very quiet in Sofia. August is holiday time for Bulgarians so many of them would have been at the coast. Even so the entire population of the country is only 8 million souls. There are great stone lions everywhere in Bulgaria. Apparently the climate was conducive to lions many years ago and they were common here. Chatting to some protesters in the town square we discovered they had been there on a peaceful demonstration against the current government for 200 days.

The politicians are Mafia they were saying. They are strangling the economy and making the Bulgarian people poor. One guy played rousing communist music on his upright piano. A storm gathered over the beautiful Nevsky cathedral and the huge bells started to ring. It was a fittingly dramatic end to an unforgettable week in beautiful Bulgaria. 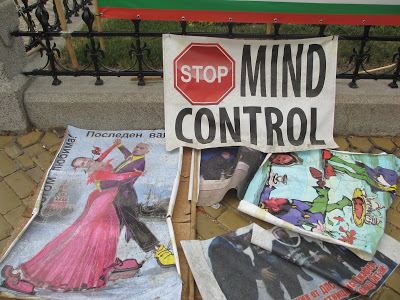 Read more about our stay in the Bulgaria countryside here