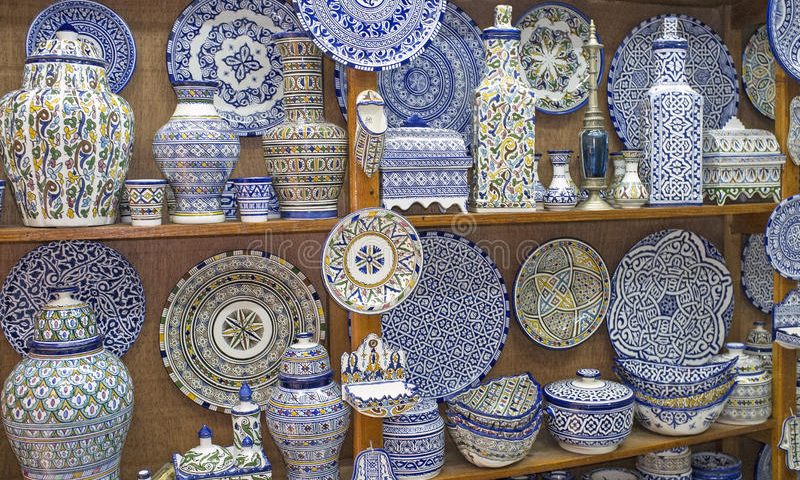 Fez is a very special city. If you like Game of Thrones you will be in your element in the amazing Medina (walled city) of Fez. More exotic even than the better known Marrakesh, this former capital of Morocco will take you back into the sights sounds and smells of a medieval way of life, while simultaneously satisfying the cravings of the most addicted shopaholic.

If, like me, you have a passion for pots and a penchant for beautiful Berber carpets then you will be in a happy place. Bartering is pretty much compulsory here, and the only way to get good at this – as with so many things – is just to get on and have a go.

Even when you think you have got something for a ridiculously cheap price, you will still have paid many times what the locals would have, so bear that in mind as you dish out your dirhams.

Fez is the second largest city in Morocco, and was in fact, its capital until 1925. It is officially in North Africa, but it is blend of Arabic, French and African culture. This makes Fez a pretty exotic multicultural destination.

The city is surrounded by olive groves and gorgeous golden farmland, framed by the Atlas mountains. The backdrop is that of a biblical landscape,  but the Medina is the beating heart of this unique destination.

Most tourist information advises the first time visitor to get a guide to help negotiate the maze of criss crossing narrow streets within the towns ochre walls, but don’t be intimidated.

People here are friendly and helpful and it is a lot more fun to explore it by yourself. Just remember downhill is in, and uphill is out! (well more or less anyway..) You can always adopt my sophisticated method of navigating by shop signs and wall art. Our Riad, for example, was right at the ‘Bad Brigade’ graffitti. Or was it left?

The Medina is a UNESCO World Heritage site and is one of the best conserved historic towns of the Arab-Muslim world. It is also one of the world’s largest car-free urban areas.

Wend your way through the alleyways and you will be pass men pushing heavily laden carts up stepped cobble streets. You will also meet donkeys, mules and horses all carrying unfeasible looking loads.

Apart from the odd scooter, there are no motorised vehicles here. Founded in the 9thCentury and home to the oldest University in the world, Fez is the country’s cultural and spiritual centre. The Medina was the main attraction for me however. There are indeed a number of important monuments to be seen. I promise to visit them next time I go.

With limited days to spend here, immersion in the Medina had to be no 1 on my things to do list. It’s not just one Alladin’s cave but a whole city of them.

An unprepossessing door in a wall can open up into a labyrinth of jaw dropping recesses. A network of rooms is revealed packed with the ceramic equivalent of crack cocaine. If only we could carry them all back with us!

After considerable experience of purchasing pots from foreign destinations, I know only too well that putting such delicacies into the hold is a recipe for disaster. It’s hand luggage only, so purchases must be made with that in mind

Part of the market sells more traditional fare to the locals. Fruit, vegetables and animals are all on offer. Live chickens, ducks and turkeys survey the madding crowd, hopefully unaware of their fate soon to come. You may see a few things being strangled or plucked while still alive so be on your guard.

Food in Morocco is very good. Unlike in some places I have visited where the produce is good, but they don’t know how to cook it – the Morrocans know how to whip up a tasty dish.

My favourite was chicken tagine with prunes and toasted almonds. Served with my favourite side dishes of green lentils, Moroccan salad and dark bread. You can get good coffee or freshly squeezed orange juice at every turn, but don’t expect alcohol outside of hotels.

Fez – magnificent in May

I felt right at home in the Medina. In May, the temperature was a perfect 25 degrees or so, although things are due to get much hotter which could make Medina mooching a less attractive option. There are several gateways into the medina and the one nearest to was the blue gate ‘port bleue’ beautifully tiled and grand.

I remember once dubbing the Trafford Shopping Centre in Manchester with its fake columns, grand exterior domes and slightly surreal architecture the ‘computer generated city of Theed’ after the city in the Star Wars film.

The city of Fez is the real thing. Colourful, vibrant, full of life and character and with a million options of beautiful things to buy.

The ‘funky cold Medina’ is a hip hop song from 1989, something to do with drugs apparently, but Fez has the real Medina, and it is a very funky Medina indeed. It’s like live street theatre here every day, and you are both the audience and a player on the stage. I heartily recommend it as an antidote to the ordinary.

Check out more Morocco stories From Fez to Meknes