Postcard from Kefalonia – from Assos to Ithaca

This gorgeous historical Greek island, pretty much has it all. Perfect weather, perfect sea, delicious food and spectacular mountainous forests and coastal scenery. This was my third visit to Kefalonia and I stayed this time in the impossibly pretty fishing port of Fiscardo.

Following in the footsteps of Odysseus

The most famous historical character connected to Kefalonia is probably Odysseus of Ithaca, king of the Kefalonians.

I read the story of Odysseus and his men (in translation of course) as a child and was always captivated by his adventures. I was a little concerned that the women in the stories rarely seemed to get to join in with the fun. They only got to do a lot of waiting about, weaving and some intermittent tempting as far as I could see.

Anyway, we decided to follow in the footsteps of Odysseus with a boat ride from Fiscardo to Ithaca across the Ionian sea. Ithaca was supposedly his ancient home, although some say it was actually Kefalonia itself.

Kefalonia – off to Ithaca!

Off we sailed off on a large, rather crowded vessel with the agent Nautilus travel, across the gorgeous turquoise, transparent ocean.

I am not much of a sailor myself and usually become a bit queasy at the mere sight of a gangplank, but even I can see the attraction of wandering about on a boat on this beautiful transparent sea. We could weave our way through a mesmerising maze of little islands, calling in at different island ports for some fresh seafood and a bit of shore leave.

Of course Odysseus had much more dramatic adventures than we did. He had to contend with hand to hand combat, shipwrecks and encounters with magical creatures, such as Sirens and Cyclops and Gods. But you can appreciate the parallels.

Kefalonia and the Ionian sea

The Greeks are a nation of sailors. Our taxi driver told us how he learnt to navigate by the stars when he was just seven years old. ‘There are only three nations on earth that can still navigate by the stars’ he told us ‘The Norwegians,  the Filipino’s and the Greeks.’ That, I did not know.

On our boat tour we stop first at Gidaki beach, a real castaway destination. This is the largest isolated beach of Ithaca and only accessible by sea. To get to the beach you have to slide from the boat into the spectacular crystal clear sea and swim for shore which is actually pretty easy to do.

The only tricky bit is where to put your money if you fancy buying a drink at the rustic beach shack. The rather cute Robinson Crusoe style bar was flying a Jolly Rodger flag for helpful identification.

Vathi is Ithaca’s main town and tourist area. It is home to both a statue and a fine bust of our hero Odysseus.  Kioni village further round the island was my favourite stop. This is another delightful marina with small tavernas and a super pretty little church.  Also a very nice bakery.

Greek pastries and pies are not for those on the Slimming World plan but they are mouth wateringly good. We had giant croissants and a sausage roll, yum.

Ithaca is a small peaceful island with no airport of its own. It does have some lovely accommodation here though and caters for the more eclectic traveller. These cute little ports are also very popular with the yachting set. I can see why Odysseus may have made it his home. 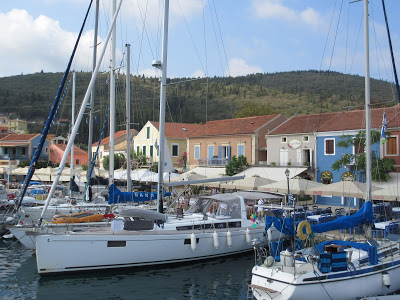 Another heartbreakingly pretty village on the mainland of Kefalonia is Assos, a picturesque secluded location with a horse shoe shaped harbour. The whole area is surrounded by beautiful coastal scenery of dramatic white rocks and cobalt sea. Surrounding hillsides are covered in forests of cypress and pine.

Dominating the entire area are the remains of a Venetian fortress high up on the imposing peninsula. You really need a car to access Assos as it is at the bottom of a steep series of scary hair pin bends which are very popular in Kefalonia.

If you don’t have a car, it wouldn’t pay to be in a hurry to get anywhere, as there is only one bus, once a week to Assos, which travels into the capital Argostoli.

Little taverns perched on the quayside overlooking the bay attract most of the visitors and of course the Greek cats. There are always lots of multi coloured cats everywhere in Greece. We spend a while watching a local cat hunting for fish in the shallows.

You can walk through the olive groves up the hill to visit the castle for a fabulous view out over the bay. The little beach in the cove at the bottom is another delightful place to swim from. You can strike out to explore the coastal caves if you’re a good swimmer. Or just float out and immerse yourself in that magical transparent Ionian sea.

Kefalonia is a photographer’s dream. The colours, the light and the cats are all pretty stunning. To return to the wisdom of our taxi driver once more, he explained that he had travelled the world as a young man, before realising that the best place to be was actually right here where he came from.

‘Kefalonia is like a special bubble,’ he said ‘ Here I am safe and happy.’ I think I can see why.