Kyoto on the bullet train!

We headed off to Kyoto. After our heart stopping earthquake experience (check out  A weekend in Tokyo) getting out of Tokyo for a while seemed like a very good idea. Seismic activity is increasing in the whole region apparently and even the next day, after our big 8.5 earthquake, there were two smaller ones somewhere else in Japan.

We set off in search of more solid ground. And to buy tickets for the famous Japanese bullet train to Kyoto. In Britain, train travel is often a challenge. Different providers run different bits of the network with differing levels of indifferent service.

UK tickets are the most expensive in Europe and punctuality is intermittent. The journey is often crowded and uncomfortable plus you are often crammed in, facing the wrong way. Frequent loud and unnecessarily long announcements announce an indifferent buffet offering. Occasionally you are threatened with fines if you don’t have exactly the right ticket, meaning that any snoozing is rarely an option.

It’s not like that on the bullet train! Space age high speed trains called Shinkansen connect Tokyo with most of the country’s major cities. All the trains are operated by Japan railways (JR) and run at speeds of up to 320 km/h. Most trains depart every ten minutes and they are known for their punctuality (often to the second.)

Carriages are very comfortable, spacious and silent. There have been no fatal accidents in the Shikansen’s history and all of the seats always face forward. This is astonishing to the British traveller who is often made to feel slightly sick in transit by facing away from the direction of travel. All seats are turned 180 degrees by staff at terminal stations or, you can turn them yourself if you fancy a foursome. Brilliant!

During the two and a half hour journey you are asked very politely for your ticket by a smartly uniformed guard. Serving refreshments is a beautiful doll like lady who bows as she enters the carriage and then again as she leaves. We ate delicious miniature egg sandwiches of the sort you may expect at a doll’s tea party.

The lady even told us exactly when to look out of the window so that we had the best chance of seeing Mount Fuji, the symbol of Japan. You can’t always see it if the weather is cloudy, but we did get quite a good view of this famous active stratovolcano.

In Kyoto we stay in another Airbnb which turned out to be the world’s smallest apartment. It wasn’t much bigger than a camper van in its entire footage. It was cosy though, and in a very good location handy for everything we wanted to see.

Other plus points are; it never takes long to tidy up, and it is quite difficult to lose anything, as there isn’t anywhere for it to go. From our modest window we watched the workmen on the building site roof of the apartment next to us doing their collective morning exercises led by the foreman. Very Japanese.

Kyoto is another big Japanese city. There is lot more of the traditional cultural offering here making it a huge tourist draw. There is the famous Gion Geisha district and lots of temples and shrines, some of which were really old and others which looked old, but had been rebuilt over time.

Kyoto is also a big shopping hub with some pretty up market stores. There seemed to be a lot more tourists here than in Tokyo, sampling the local wares.

One highlight for me was Nishiki market, which specialises in all kinds of Japanese delicacies. Many different and in some cases quite strange things to eat were on offer, although not everything was so tempting to my Western tastes.

I can take or leave a pickled mushroom or a whole fried fish on a stick. Or a bowl of noodles with ice cubes in it. Or a patty on a stick with the consistency of a rubber draft excluder. However it is a very lively and fascinating place to visit, very popular with locals and tourists alike.

More up my street was the cat café where they charge by the half hour to stroke and pet big, floppy, furry cats. We even got some super cool glasses made for a fraction of what they would cost at home.

You pick out your ultra stylish Japanese frames and then they make up your glasses with the lenses in nine minutes! Not eight minutes, or ten minutes – nine minutes precisely! You can’t heat a pizza up in that time!

Also of note was the welcome sign at one of the restaurants in Gion which listed advice for patrons including:

Do not trouble other customers with: 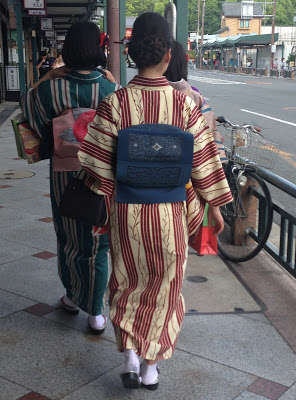 After a whistle stop tour of Kyoto in two days we got our MK cab back to the station. Our taxi driver is the jolliest driver ever – definitely a character out of Total Recall  – and we head back to Tokyo. We checked our earthquaketracker.com app on the phone first. Just in case.