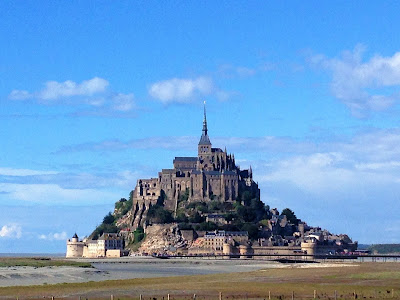 Long before CGI created the island fortress of Dragonstone in Game of Thrones, there was the towering precarious fairytale abbey of the magnificent Mont Saint Michel. This is one of the outstanding UNESCO sites in this part of France. Mont St Michel is located on an island just off the coast of the region of Lower Normandy.

The island is the site of the spectacular and well-preserved Norman Benedictine Abbey of St Michel. It balances on the peak of the small rocky island.  The abbey is surrounded by the winding streets of buildings wedged into every possible nook and cranny of the multi layered medieval town.The worship of Saint Michel was introduced on the Mont in 708, and it became an important places of medieval pilgrimage. Benedictine monks started building an abbey here in the 10th century.

The heroic resistance of the Mont to English attacks during the Hundred Years’ War (14th and 15th centuries) made it a symbol of French national identity. Monks left the abbey in 1790, and it was listed as a historic monument in 1874. The whole site has been returned to its former glory thanks to on-going restoration work.

Entry to the Abbey was free on the day we were there. It is definitely worth the climb, for the magnificent view out over the estuary. The ancient abbey itself exudes history and has an atmosphere of peace and calm.

The tidal mudflats surrounding the island contain areas of deep mud and quicksand. Visitors to the island are advised not to attempt crossing the flats. Despite this we saw lots of people heading out across them. They were trailing footprints behind them which from a distance looked like bird tracks criss crossing the sandy causeway. The tide here is one of the fastest-rising in Europe so you always need a guide.

The bridge to Mont St Michel

These days you must park in  prescribed car parks which are a couple of kilometres out. You then walk the route up to the Mont over the bridge. It is such a surreal looking settlement that you can’t help but take multiple pictures of it looming larger as you approacah.

We walked up the the close set winding streets awash with souvenir shops and restaurants. We sat down with a sea view and ate some galettes. These are pancakes with savoury fillings and then for dessert, we had a sweet version of a crepe with caramel sauce – delicious! The lovely weather had brought out lots of visitors to this very famous French attraction.

On the way back we discovered a field of mysterious blue flowers which were ripe for a photo shoot. Later I found out that they were called Phacelia. They are sometimes grown as green fertiliser or as a treat for nearby honey bees, as they love their super sweet pollen. I do like a blue bloom.

Another good day out in this area of Normandy is a visit to the the Airborne Museum. It’s in Sainte-Mere-Eglise only a few miles from the D Day landing beaches. This recently expanded French museum is dedicated to the memory of American paratroopers of the 82nd and 101st airborne divisions who parachuted into Normandy on the night of June 5–6, 1944.

There are lots of artifacts on show and a simulated operation Neptune where you can feel what it would be like to be in one of the aircraft. There are also and several show reels of fascinating archive footage.

Famous stories include that of John Steele the paratrooper whose parachute got caught on the church steeple. Despite being shot in the foot by the Germans, John managed to play dead for two hours dangling from the church, before he was rescued. He later returned to active service.

BBQs are a summer essential in France. Our BBQ featured merguez sausages, steak hache burgers and fresh river trout – all delicious. Served with home grown new potatoes, Normandy butter and a fresh local salad. And of course the ever important french baguette.

A feast for kings without doubt. In Normandy you can live ‘ a millionaire lifestyle on a shoestring budget!’ Normandy is beautiful in the summer. The grass is so green and lush and the trees are laden with apples and chestnuts. The hedgerows are heavy with the sweetest blackberries. It’s a beautiful part of France and I am pretty sure I will return here in the future.