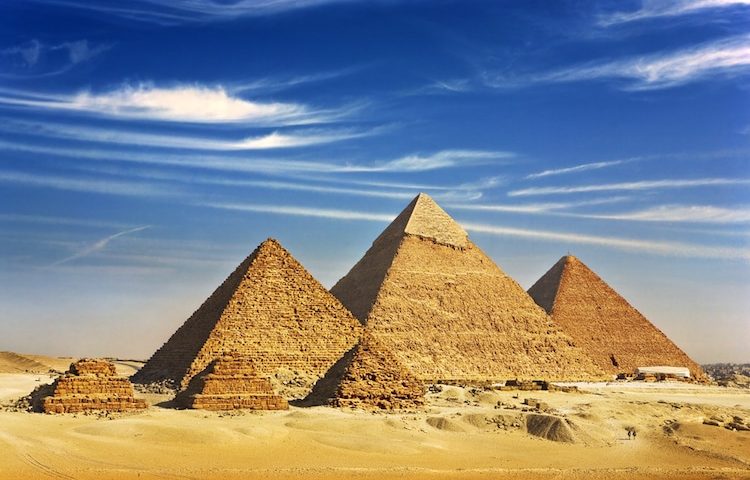 The pyramids of Cairo are famous throughout the world. I had always wanted to see them.

We took the day trip to Cairo from Sharm el Sheik by plane. There has been unrest in Cairo, well covered by the media. We were on a guided tour however, so I felt pretty safe.

Even one incident can affect the number of visitor numbers to a country. Despite its archaeological riches, Egypt is a poor country and relies heavily on its tourism trade. I had always wanted to see the great pyramid of Giza, the only one of the seven wonders of the ancient world still standing.

We checked online and with other people in Sharm to see if the trips were still going ahead without incident. They were.

The flight from Sharm airport to Cairo is around 45 minutes. You fly on a small, rather geriatric plane with Memphis air. Memphis, was the ancient name for Cairo. This Memphis was around long before Johnny Cash or country music.

Our tour guide was Abdul Nassar, a professional Egyptologist. He provided a fantastic introduction to the history of Egypt. He explained that when he started his job as a guide ten years ago Cairo was home to 18 million people. It now has a population of 30, yes 30 million souls.
Our first stop was the Egyptian Museum built in 1878 to house the amazingly preserved artifacts discovered in the tombs of the ancient Pharohs.

Of course we wanted to see the incredible death mask of Tutankhamun, the boy king. It is made from more than 24 pounds of solid gold. By analysing his mummy scientists found that he died of poisoning when he was only twenty years old.

He had been king since he was eight or nine but he tried to give more prosperity back to his people. For instance he reduced the tithes they had to pay to the multitude of Egyptian Gods. The politicians surrounding King Tut did not take kindly to this reduction in their wealth and were most likely responsible for getting rid of him. There is a lot of gold in the Egyptian Museum. Gold was plentiful in Egypt whereas silver was not. It is an interesting fact that the sarcophagus of the government ministers were made from silver and not gold because they considered it more valuable.

Treasures as old as the Pyramids

Most of the treasures in the museum are more than three and half thousand years old. The museum is stuffed with precious items looking as if they were left there yesterday. There is a decorated flip flop so well preserved it looks as if you could slip it on and make your way down to the pool in it.

The Egyptians had an expert skill in preserving things which has never been equaled since. Abdul had a real passion for his subject – it really is a most amazing museum. He explained that everything about ancient  Egyptian culture was all geared towards the afterlife. It was all about rebirth and reincarnation.

You took into your tomb everything that you would need in your next life. Archaeologists actually found little evidence of how Egyptians actually lived from day to day.

Everything we see today, the tombs and their contents, the pyramids and temples, were all about what was going to happen to you after you were dead. Why spend so much time and energy on things which would be of no use in this life?

I’m all for looking ahead but that is a five year plan taken to unreasonable extreme. Did it help to control the masses – the threat of what might happen to them in the next life if they didn’t toe the line in this one?

We reach the pyramids

Next stop were the pyramids themselves. It is quite a stressful experience running the gamut of the plastic pyramid touts, the camel and horse ride sellers and those locals  ‘helping’ you around the site. All for money of course.

There isn’t any pester regulation and your attention is rather distracted by them. One couple complained that they got charged ten pounds for taking a picture of a camel.

The largest and oldest pyramid is the pyramid of Cheops. There are smaller ones for his son and grandson and the Queens get the smallest pyramids of all. Typical.

The great sphinx which has the body of a lion and the wings of an eagle and the face of a king is also an iconic Egyptian symbol. It was meant to guard the entrance to the pyramids but has proved fairly ineffective as much of the stone from the pyramids was stolen by locals to make bridges or houses or roads in Cairo.

The sphinx’s nose and beard are damaged but she is still majestic. She remains the largest monolith statue in the world, carved from a  single piece of limestone.

The brand NEW Grand Egyptian Museum will open next year. It will give a brand new home to the many exhibits of the previous Egyptian Museum. Tutankahmun will be back from his world tour. The colossus statue of Ramses the II dominates the huge atrium at the entrance of this incredible venue.

Visit my other Egypt blogs – Sunshine In Sharm El Sheik