The island of St Lucia is a country of lush rain forest, sunshine, showers, and creole cooking. It is in the Eastern Caribbean sea on the boundary with the Atlantic Ocean. Northwest of its more high profile cousin Barbados.
One of the Windward islands, it was subject to an Anglo-French tussle over many years. Seven times ruled by the French and then seven times by the English.
It’s been independent now for 35 years but still has a system of English law. It is part of the commonwealth, and recognises our Queen as head of state.
If an island can be retro-chic then this is it. A bit stuck in the 70’s, the poor remain poor. The revenue from tourism is going largely to big hotel chains. The huge super yachts that pull into the picturesque Marigot Bay keep their tax free wealth as firmly off shore as their sleek sailing  vessels.

St Lucia is quietly charming. It does rain a lot but this means magnificent rainbows. As the island is nearly half rain forest, a lot of rain is a bit of an essential.

Curtis, our taxi driver from the airport was very proud of his 16 year old Toyota which he obviously looked after with loving care. With a bit of a Beverly Hills Cop vibe going on he was keen to impart a positive first impression of the island.  He said ‘I have lived all my life in paradise and even when I am on vacation I stay right here!’

Everyone speaks English but people speak French Creole at home, which is a kind of pigeon African/French dialect.

St Lucia is a volcanic Island, but the last time there was volcanic activity was 1766. The lava from that eruption created two great lava plugs – the Pitons. You can walk right to the top of them if you are feeling adventurous.

Marigot bay is famous chiefly for featuring in the black and white 1967 film, Dr Doolittle. In one particular scene Rex Harrison rides into the bay on a rather badly constructed giant pink sea snail.

This fact was mentioned by Curtis and in all the guide books I looked at. It is perhaps not the most impressive claim to fame. Another surprising fact is that St Lucia is home to the most Nobel prize winners (per head of population) of any sovereign countries in the world. Two.

Marigot Bay is billed as one of the most picturesque in the Caribbean and I think it probably is. Fringed on three sides by steep rainforest and with a charming little port. It is dotted with pastel coloured cafes and shops. The Fourjacks super yacht – (did someone win it in a card game?) pulled in, registered in the tax haven of your choice.

Checking out the super rich

The contrast between the super rich visitors gliding in for dinner at the (rather expensive) Rainforest Hideaway Restaurant- and the very poor locals provides a stark contrast. The eaterie is about as cool a location as you can get, built out on a jetty into the bay and selling top price designer cuisine.

Selling a few grapefruits or setting up a roadside home cooking cafe is more how the locals pass the time. You can usually tell the level of the local economy by the bus fares. If you go in a taxi from the hotel to Castries it will cost you £20 ($40) If you go on the bus it will cost you 60p.

The only problem with the bus is that you never know when it’s coming, if it’s coming, or where to get it from. Other than that, it’s a great way to get around!

The main industry in St Lucia is Tourism followed by bananas. There are plantations all over the island. Historically there was a reciprocal agreement with the UK to exclusively supply all our banana requirements. That trade agreement has now expired however, and we’ll have any body’s bananas now.

It is a lush landscape with friendly people and a somewhat underdeveloped range of attractions. There’s a smelly volcanic crater, a cute Botanical gardens and a rather oversubscribed Sulphur mud pool. 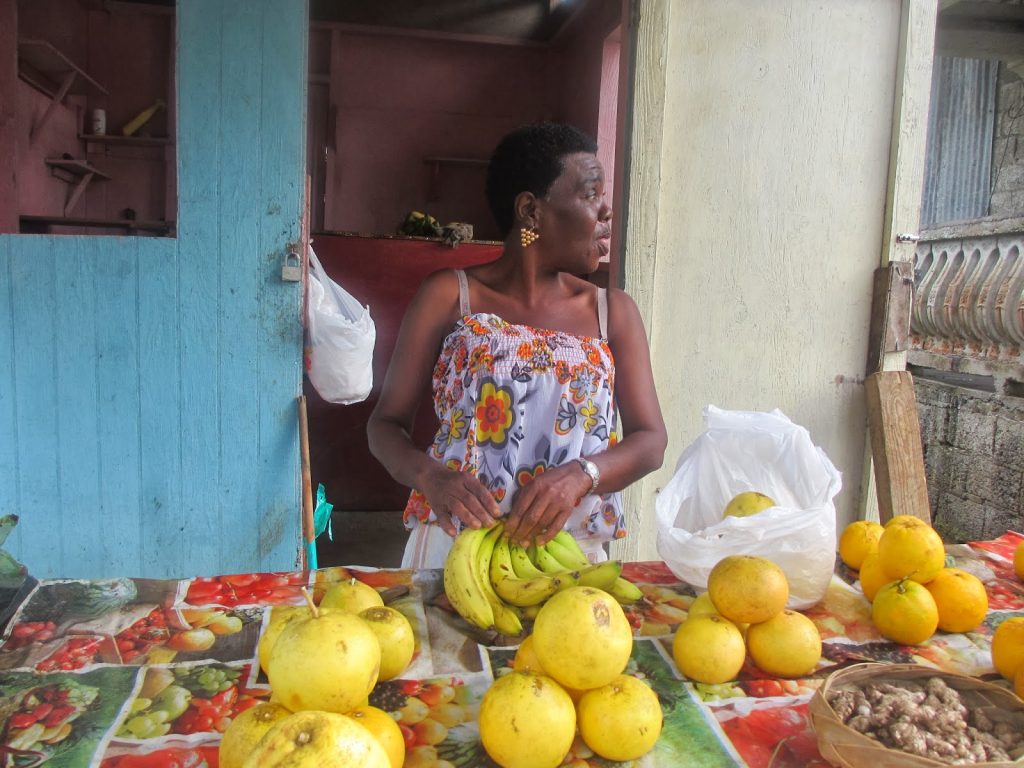 There’s a lot of Rum and so rum based cocktails are naturally the order of the day. Or you can try the local Piton beer (roughly translated, a Piton is a spike or peak.) It tastes to me like every other bottle of beer in the universe.

I liked St Lucia more than some of the other Caribbean Islands I’ve visited. If a local in a towering Rastafarian hat approaches you in Jamaica, you can be pretty sure he’s after your cash or trying to interest you in some illegal substance.

If the same thing happens in St Lucia, he is more likely to want to discuss Somerset County Cricket or the time he lived in Reigate in Surrey for ten years. I liked that.

What is the future for the Caribbean?