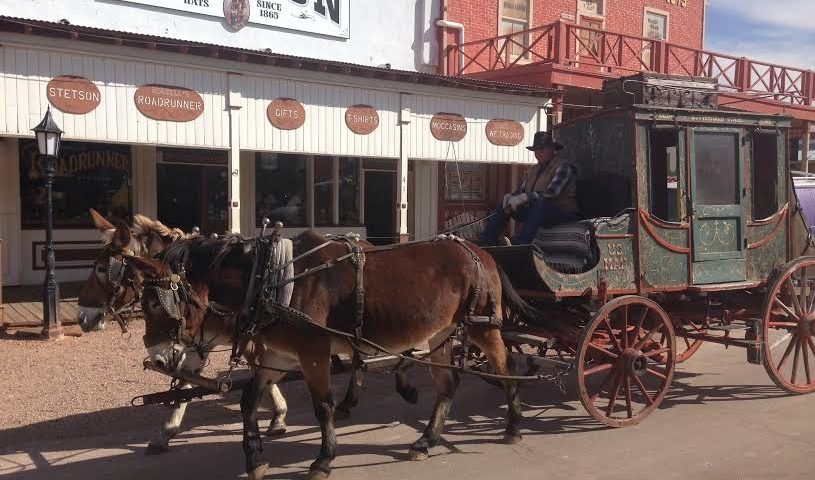 Tombstone – the town too tough to die

Tombstone in Arizona is a real slice of Americana. We have all heard of the Wild West. That time in American history that looms large in the psyche of the classic movie fan. It was an exciting time, heralding the forward wave of American westward expansion. It began with English colonial settlements in the early 17th century and ended with the admission of the last mainland territories as states in the early 20th century.

Tombstone was founded and named in 1879 by Ed Schiefflin when he finally struck a rich seam of silver on his last day of mining. It was an ironic nod to his friends who had taunted him ‘Ed you gotta be crazy – the only rock you’re gonna find there is your Tombstone!’

Photographs of Ed in Tombstone exist and show him as a rather handsome young man who looks quite pleased with himself. He sports a luxuriant dark beard.

The demon drink seemed to be involved in many of the gunfights that happened.  I doubt it improved anyone’s aim, and it was also responsible for one of the great fires in Tombstone. It slipped the mind of a saloon employee that barrels of whiskey and a lit cigar do not mix. Sixty six buildings burned that night.

The news was reported in the Tombstone Epitaph which is still in circulation today. But Tombstone is most famous for the Gunfight at the OK Corral.

Immortalised by Hollywood in the movies, some of our most iconic actors have taken on the roles of those infamous characters. If you go to Tombstone today you can take a stage coach ride around the town. While taking the ride around you can hear about the history of the place from your stage coach driver.

Our stage coach was pulled by two beautiful large black Percheron horses called Larry and Paul.  The extremely bumpy and uncomfortable jolt around the dusty streets takes you around in the historically accurate replica of an 1800’s taxi.

Tombstone – gunfight at the OK corral

There is a choice of daily gunfights in Tombstone. Some claim to be more historically accurate than others. The best known gunfight of all is the Gunfight at the OK corral.

Watching the actors re enact this famous fracas, which they do three times a day, I asked Doc Holliday afterwards if they were trained actors. Apparently some of them are trained actors and of course this gig is going to look good on your resume. Some of the cowboys were just locals who’d fallen into fake gun fighting as a perfectly respectable career option around these parts.

Central to this story are the Earp brothers and in particular the extraordinary character of Wyatt Earp. It is maybe no coincidence that Earp was tee total, but he was one of the only gunfighters who never got shot in a showdown. Although he did shoot a hole in his own coat accidentally, once.

It was actually Wyatt’s brother Virgil who was the Marshall in town. His brothers Wyatt and Morgan were his temporary deputies. The Earps tended to protect the interests of the town’s businesses and other residents.

The term ‘cowboy’ at the time really meant an outlaw. We still use this when we call a rogue trader a ‘cowboy’ today. The people that worked with cows were called ranchers or cattlemen.

In 1881 three cowboys tried to rob a Kinnear and Company stagecoach carrying silver bullion and in the process shot and killed its popular driver and a passenger. This set off a chain of events and a feud which ultimately led to the gunfight at the OK corral.

Gunfight at the OK corral

Although in the 1990’s film Tombstone the gunfight lasted 9 ½ minutes this is Hollywood history, in reality, it only lasted about 30 seconds. Only 30 shots were fired.

It was about 3pm on Wednesday October 26th 1881 when things came to a head between tow factions of cowboys. Billy Claiborne, Ike and Billy Clanton and brothers Tom and Frank Mclaury and the Earp brothers and Doc Holliday. Ike and Billy ran off unharmed, but Billy and the McLaury’s were killed.

Virgil, Morgan and Doc were wounded but Wyatt remained unscathed.

Wyatt Earp survived into his sixties and lived to have many more adventures. He was at different times in his life a constable, city policeman, county sheriff, buffalo hunter, bouncer, saloon-keeper gambler, pimp, miner and boxing referee.

Earp later moved to Los Angeles and became an unpaid film consultant for several silent cowboy movies in the early 1920’s. It is said he made friends with a young actor named Marion Morrison who later became one John Wayne. It is also said that Mr Wayne based many of his roles on Wyatt and the characters he told him about from those old Wild West Days.

More about Arizona – the awesome air and space museum PIMA