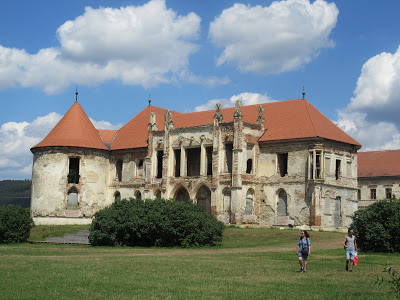 My trip to Transylvania was part of the Green Village project in Romania which aims to improve the opportunities for sustainable tourism. Transylvania actually means, ‘the land beyond the forest.’ For most of us, Transylvania is famous because of Bram Stokers’ fictional character. The blood thirsty Count Dracula. At least it is linked in the minds of most people in the world, apart from the people who live here. To them Transylvania is their home, and Dracula just a story made up by a writer, albeit one based on a real and very fearsome Transylvanian count – the so called Vlad the Impaler.

Transylvania – the city of Cluj Napoca

We set off on our last day back to Cluj Napoca and the prospect of the next day’s flight home. On the way we stopped at a local market where I bought polyflora honey and honey comb, a huge bag of bilberries and a pot of local medicinal cream. The bilberries made my tongue and teeth go purple and I couldn’t really work out what the cream was meant to do, but the honey looked very promising. There aren’t a great many things to buy in Romania, so it’s good to stock up on local produce. It was quite tricky to even track down a Dracula fridge magnet, which you might imagine would be ubiquitous in this part of the world.

I wanted to see a Dracula type castle while on this trip, who wouldn’t? The one which most people associate with the story, as it is the only one that really fits the description in the book, is Bran Castle.
Bram Stoker’s character, Dracula, is a Transylvanian Count with a castle located high above a valley. This castle perches on a rock with a flowing river below, and this is just the setting for Bran Castle.
However, as this castle was several hours drive away, this presented a problem. As an alternative we visited the nearest Dracula type castle. I was not disappointed.

Transylvania has a wealth of amazing turreted castles. They all look like an illustration straight out of a fairy story, and we made our way to Banffy Castle which our hosts had not visited before. Although now a ruin, the castle is on an endangered buildings list and is slowly being restored by the Banffy family. In 1944 the castle was burned by retreating German troops in retaliation for pro-Allied efforts by the count. After the war, Romania came under Communist control and  the castle was neglected. It was even looted for building materials. Vandals and natural decay further damaged its fabric. In 2012, the Transylvania Trust established a pioneering project, the Electric Castle music festival, which has brought over 200,000 people to Bánffy Castle. Revenue from the music festival is helping to support conservation work. The restoration of the castle complex should be finished by 2026.

It was a glorious sunny day for our visit to the castle.  We had our picnic next to a small lake where we could admire the grand building. We drank our favourite Romania Rose wine, which we had bought a huge jug of from a local supplier. Noticing a stage in front of the castle, I decided that we should act out the story of Dracula ourselves! Several members of our group drifted away into the background, looking uneasy, as I tried to rope them in for a performance. A handful of the group remained. With only a skeleton cast I was able to elicit a short al fresco retelling of the Dracula story.  We were in Transylvania after all!

I loved my trip to Transylvania and learned a lot about the Green Village project.  I feel very lucky to have had the opportunity to explore this unique part of the world. The local people are so friendly and I had some of the most delicious fresh food, including fresh donkey milk! Romania is a beautiful country. It has splendid mountains, picturesque rolling green hills, rivers and lakes.

Trees still cover over a quarter of Romania, and the thick ancient forest is full of wild animals. It is inhabited by bears, deer, lynx, chamois and wolves. About a third of the country consists of the Carpathian Mountains, also known as the Transylvanian Alps. The remaining countryside is covered in vineyards, orchards and fertile farmland. It is a beautiful place – the film ‘Cold Mountain’ was shot here. and it was also the birthplace of legendary gymnast Nadia Comaneci. We were all impressed with the rural beauty of Transylvania. I hope that one day I may return to this fascinating place of such history, culture and stunning natural landscapes.