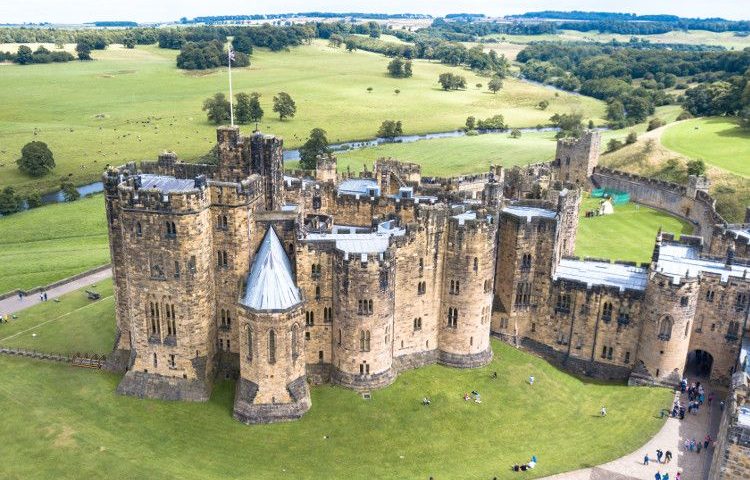 Alnwick is a market town with ancient feudal origins. It lies in the heart of rural Northumberland. Alnwick castle is the huge intact family home home of the Duke of Northumberland.

The castle dates back to the 11th century and is familiar to all as Hogwarts in the Harry Potter movies. It has also appeared in films like Elizabeth, and Robin Hood, Prince of Thieves. It also appeared in the last season  of Downton Abbey at Christmas time.

Alnwick Food Festival takes place every year in late September, in the ancient Market Place which has served the town since the 1500’s.

Jean Christophe Novelli, the very talented and charming French chef was supporting the festival with his demonstrations. You could even join him at the Outcook cookery school if you were feeling the Master Chef vibe.

There arre still lots of fun things to see at the festival which champions local produce and suppliers. The team from the Jolly Fisherman Pub and Restaurant at Craster were there promoting all things kipper and seafood related. Fresh shellfish and seafood from the Northumberland coast is pretty hard to beat.

The monks from Lindisfarne were diversifying. From just Mead they also make Lindisfarne cream liqueur and other spicy punch products. They weren’t really monks of course but it was monks who first made mead on Holy Island.

The monks from Lindisfarne were diversifying from just Mead to Lindisfarne cream liqueur and other spicy punch products. Well I don’t think they were really monks, but it was monks who first made mead presumably because it helped to while away the time in the days before Sky TV.

Fine local meats cheeses and chocolate are on offer. The market place was being patrolled by George the giant chicken, who was claiming to be the Food Festival mascot.

Lots of tasty street food was in evidence. Everything from gourmet venison burgers, to tasty Indian curries and French crepes with ingenious fillings such as spinach and pine nuts and goat’s cheese – yum! Of course all this eating and shopping can be quite tiring.

The larger than life character of the Alnwick Town Crier John Stevens takes centre stage with his bell and his good lady wife whom he calls his ‘escort.’ ‘I used to have a Morris Minor’ he quipped ‘but now I have an Escort!’

He is a very jolly cahp and a definite asset to the town. I asked how often he did his town crying activities. ‘Whenever I feel neglected!’ was his reply.

I had to buy some Ginger Parkin made by the talented Gingerbread Mam. This is one of my favourite cakes and reminds me of childhood Bonfire Nights. It needs to be chewy and gingery and comforting. Her cinder toffee was also pretty much heaven on the tongue for us sugarholics.

Another very special feature of Alnwick is Barter Books, located in the old railway station just on the edge of town. The shop is notable for its use of a barter system whereby customers can exchange their books for credit against future purchases. It’s one of the largest second hand book stores in Europe and is a tourist attraction in its own right.

I really like the building itself. The old station and its various rooms has been restored and recycled. The artwork is unique and it has a beautiful interior.

An arcing artwork of lights illuminates a cosy browsing area. The old waiting room has a real fire and is part of the Station Buffet café. The ticket office window looks through to the children’s book section.

Two model trains chug around on a track on the top of the bookshelves. There is another big real fire with leather seats next to it that you can sink in to while helping yourself to coffee and a home- made biscuit for less than £1.

The old station has a lovely peaceful atmosphere. It is nice just to wander around in perhaps observing the old stone water fountain which is still in evidence built into the wall.

The original WWII Keep Calm and Carry On poster was discovered here in a box of books in 2000. The reproduction of it on countless items has now become a huge worldwide phenomenon.

It has also been permutated a million different ways with largely regrettable results. Now there’s even a Keep Calm O Matic website where you ‘Just enter the pithy saying of your choice, choose a few simple options, and you’ll have your very own Government-approved motivational slogan.’

That’s what happens when you don’t hang on to the copyright! Perhaps Churchill had it hidden somewhere in his bunker..