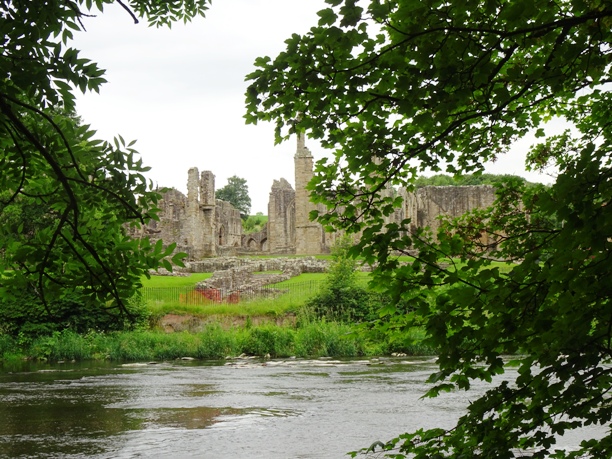 On the banks of the River Wear, in a beautiful wooded setting, stand the ruins of the magical Finchale Priory. A childhood memory of playing in the river here many years ago, brought me back to this special spot this summer.

Although an English Heritage site, it is not a high profile property. The locals love it though and this is a real hidden gem in the gorgeous Durham countryside. As well as the remarkable remains of the 12th century priory there is a caravan and camping park, lush meadows for picnics and running around in, and beautiful riverside woodland walks. Entrance to the Abbey is free. It has lots of arches and rooms and is great fun to explore. A fair amount of stone work detail is also still visible.

The River Wear rises in the Pennines and flows eastwards, through County Durham to the North Sea in the City of Sunderland. It meanders through the cathedral city of Durham and broadens out into shallow but swift waters as it passes the Abbey up on the hill.

What to do at Finchale Abbey

There is a large caravan site at Finchale Abbey with some residential forest chalets and spots for touring caravans. You can also enjoy camping without roughing it in some bespoke camping pods with lights, heating and electric sockets. The pods, insulated and double glazed, are nice and warm and have lockable front doors. Outdoor furniture and a fire pit are provided so you can enjoy the evenings outside too.

The little shop sells the basics as well as local eggs and honey from the hives on site. Visitors can enjoy fresh home made scones with jam and cream, or something called a Beef Dip.

The river is home to ducks and a heron stalked along while we watching. You can buy fresh duck and hens eggs in the little shop too. Cross the bridge and a leafy riverside route takes you along to a small beach. We discovered evidence of a wild camping spot too. I remembered a rope swing out over the river – it is still there.

The Abbey was founded in 1196 on the site of the hermitage of St Godric, a retired sailor and merchant. He settled here after a life of adventure and travel. The priory, an outpost of Durham Cathedral, was used as a holiday retreat for the monks of Durham until its suppression in 1538.

Godric was born at Walpole in Norfolk into a poor family. A travelling pedlar from an early age, he soon became a sailor and successful merchant, trading with Scotland, Denmark and Flanders.

Godric went on several pilgrimages, including one to Jerusalem, which probably took place in 1102. A ship captained by ‘Guderic, a pirate from the kingdom of England’ – likely to be Godric – is recorded as carrying King Baldwin I of Jerusalem to Jaffa, after his defeat in battle. The term ‘pirate’ did not have its later negative connotations. In those days it merely meant an independent seaman.

St Godric – from pirate to Saint!

Lindisfarne and the Farne Islands off the Northumbrian coast were visited by Godric – where he would hear many tales of St Cuthbert’s life as a hermit. He eventually abandoned seafaring to become a hermit himself.

Godric eventually settled at Finchale, where he lived to be 105! Some 25 years after his death, his hermitage became a priory.

He is best remembered for his kindness toward animals. Stories recall Godric’s protection of the creatures who lived near his forest home. According to one of these, he hid a stag from pursuing hunters. In another tale it was said that he even allowed snakes to warm themselves by his fire.

Godric lived a basic life. He ate a diet of herbs, wild honey, acorns, crab-apples and nuts and slept on the bare ground with a stone for a pillow. I am wondering if anyone has written a book about the Godric diet.

A grand day out

Finchale Abbey is perfect for a relaxing day out. It is still has a kind of home spun feel, which I think Godric would have approved of. The fare on offer today is more Callippos, cream scones and Beef dips than acorns and crab apples. It is charming spot, and is popular with families who want a day out in the gorgeous Durham countryside. And of course, it is always fun to go messing about by the river..