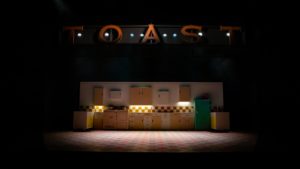 TOAST! is the stage play version of Nigel Slater’s award winning autobiography. Brought vividly to life by a very talented cast of five. We are taken back to relive Nigel’s childhood starting in the heart of the home – the kitchen. We see events through Nigel’s eyes and through the sights sounds smells and tastes he remembers.

He grew up in Suburban England where he baked jam tarts and Christmas cake with his beloved mother. He recalls the first time the family ate spaghetti Bolognese and the elaborate etiquette of please and thank you, which punctuated any restaurant visit. Food is love, and also reflects the culture of the country and the time.

TOAST – the politics of sweets!

Sweets are always a nostalgic feature of people’s childhoods. Nigel remembers the gender politics of sweets. His father labels Parma violets as ‘girl’s’ sweets and is not happy with Nigel wanting to buy Fairy Drops!

Walnut Whips are family favourites and the whole audience is given walnut whips to consume along with the characters in a particular scene in the second half. I confess, mine didn’t actually last that long. Sweets embody the nostalgia of childhood.  It’s why one of my most read blogs of all time is the one about Clough’s Sweet Shop a traditional sweet shop which has been serving sweets to the good people of Heaton in Newcastle, for over 100 years!

The show arrives at Northern Stage following a sell-out run at the Edinburgh Fringe Festival. Nigel himself was at the performance and was hosting a relaxed meet and greet after the show. I didn’t realise quite how popular he is – the place was packed. The lady I sat next to said to me.’Haven’t you read his book?’ I suspect the majority of that audience had read Nigel’s book.

The stage version is a colourful joyous confection, tinged with bitter sweet nostalgia. There is music and dancing and 1960’s style. The characters from Nigel’s childhood – his family and friends revolve around our schoolboy hero as he discovers his love of food. It is fast, funny and quite moving.

Food is love in the world of TOAST!

This is a rather charming theatrical confection. It’s particularly good when showing the bitter sweet flavour of Nigel’s relationship with his mother. The memories of his adored mother are vivid, as is the pain of losing her to asthma while he was still very young. “It is impossible not to love someone who makes toast for you. ” I can, of course, agree with him on that.

Toast is at Northern Stage this week and then on tour. Check our venues and dates here TOAST!