Potfest in the Park

Potfest in the Park is the largest festival of its kind in the UK. If you are a lover of fine ceramics, either to use around your home or just to appreciate as art, this is the event for you. Artists are welcomed to the gorgeous grounds of Hutton in the Forest. It is just a couple of miles from Penrith, gateway to our lovely Lake District.

Many of the artists travel hundreds of miles to exhibit here. They come from as far as Eastern Europe, Australia and Japan. It is a prestigious event and attendance is by invitation only.  It is a cultural feast in pretty perfect setting

Hutton in the Forest

Hutton-in-the Forest country house is still a family home. The beautiful grounds and gardens are definitely worth a wander around.

The Walled Garden, built in the 1730s, houses a large collection of lovely plants. The terraces were originally laid out in the 17th century.

I love the tree walk around the grounds where you can identify dozens of rare trees planted by the 1st Lord Inglewood. A free tree trail guide has seventy species to track down, including some giant California Redwoods.

Potters at the Potfest

Potters display their work in marquees on the lawn. There is so much creativity here – there is always something to intrigue and engage you.
Every year there is a potter’s competition with a different theme. This time it was ‘Out of this World.’
Visitors meander across the green inspecting each piece and cast their vote to say which they like the best.
There is a potter’s choice award too. These are special pieces and it is a lot of fun to work out each potter’s interpretation of the brief. It really shows off the creativity, the beauty and often the humour that can be contained in a ceramic piece.
The people’s choice was the slightly puzzled looking dinosaur in a space suit. He was creating an interesting visual juxtaposition. The caption read ‘Leading paleontologist Professor Jardine’s ideas on the disappearance of the dinosaurs were quickly ridiculed by his peers.’

The potter’s choice was the rocket dog. A small space man stands on the orange nose cone of a rocket clutching Laika, the first dog in space. 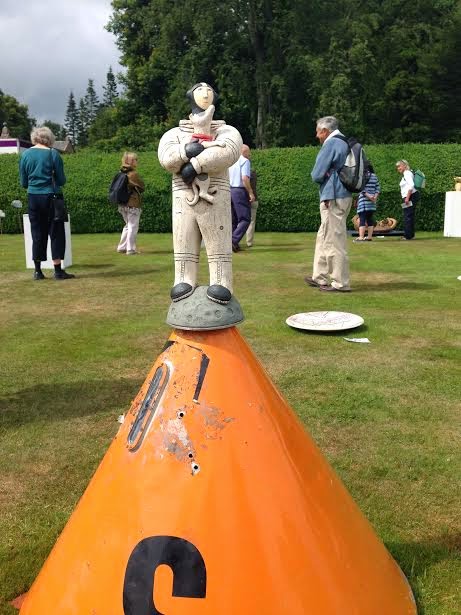 David Hilton’s ‘A world perceived,’  had three Munch like figures having a good scream. The caption was ‘The world as seen by each individual can be disturbingly different.’ Ceramics as philosophy.

Many of my favourite potters there but there is always someone new to see.  David Hilton is a repeat visitor. His beautiful detailed pieces have figures of animals and trees. They are depicted in multiple coloured enamel glazes which are built up over repeated firings.
He spent several years studying in Japan and they do have a Japanese feel to them but with a very modern twist. David acknowledged that the people who come to the Potfest are a pretty clued up audience, and that usually sales are good.

The animal sculptures here are outstanding. I love Jon Barrett-Danes small flock of super realistic life size sheep. They all have names and his lovely ceramic sheep dog Raven watches them.

I sat for a moment on Hatty, the most robust of the flock, with permission of course. Jeremy James is also an exceptional sculptor of realistic animals, in particular the wildlife of the Inner and Outer Hebrides. His delicate bird sculptures are delightful.

Guy Routledge’s funny flattened faces , heads and bottle are also very unique. I wondered if he’d had a tight squeeze himself maybe earlier in life which may have inspired him?

Refreshments at the Potfest include pork and apple burgers from the BBQ. The home made cream scones for sale in the tea rooms  in the house are top notch. We even got to try some sour cherry liqueur from Stefan Bang.

An Oompah band made up of magnificently mature musicians provide musical accompaniment. Don Roberto’s punch and Judy show was there which seemed to be in Portugese.

Well, hitting someone over the head with a frying pan pretty much translates in any language.

The Potfest was the brain child of potters Chris and Geoff Cox. They have really put Cumbria on the map with this terrific event and their passion for what they do is evident in the quality of the work on offer here. If you haven’t had enough of pots then why not tryout the Potfest in the Pens (it is held in the pens of the cattle mart) next weekend (it’s always the first weekend in August). You won’t see the same people, as potters can only attend one of the two events so if you didn’t buy anything this time round you will get a second bite of the ceramic cherry..

More about the Potfest