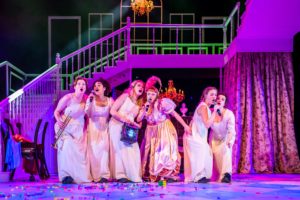 Pride and Prejudice as you’ve never seen it before!

Pride and Prejudice (sort of) is an outstanding piece of theatrical delight. It’s much more than a modern twist on a well-loved Austen story. It is an affirmation of life in all its humour and complexity and ridiculousness, and is totally relevant to our often confusing experience of life in the 21st century… It is a LOT of fun.

The all-female cast are simply brilliant actors. As adept at physical comedy as they are at heartfelt emotion. They sing and dance and play the harp, the trumpet and the accordion along the way. A quadruple threat indeed. 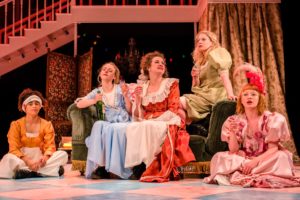 Pride and Predjudice – a comedy classic

Incredibly hilarious as it is (I haven’t laughed out loud so much in a long time) this is no pantomime piece. It is super classy on every level. The sparkling script is by Isobel McArthur who also acts in the show. She plays Mrs Bennet, escalated from a nosy garrulous busybody in the original story, to a crazed drunken match making hypochondriac. A natural progression really.

Isobel also plays the enigmatic, inarticulate Mr Darcy. Normally I’m big on casting. Mr Darcy needs to look like Mr Darcy, right? If he’s not tall dark and handsome then it’s just not convincing. All the parts in the play are taken by the six women.  By the end of the show I totally accepted Mr Darcy as a short pretty woman (she is dark though) wearing a nighty and Doctor Martin boots. That’s how good it is. 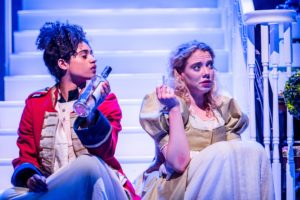 Paul Brotherston does a great job of directing this. It unfolds at a cracking pace but the action is kept very tight and the physical comedy is precise and never turns into slapstick. The actors are extremely versatile. They are given space to shine without ever stepping out of the feeling of this being very much an ensemble piece.

Hannah Jarrett-Scott is a revelation. She is very, very funny indeed.  As the gawky and good hearted Mt Bingly she is channelling ‘Tim Nice But Dim’, and as Miss Bingly she is hilariously imperious and catty towards Elizabeth as she tries to prevent her catching the attention of Mr Darcy. She is just as good playing the stoic Charlotte Lucas who is secretly in love with Lizzie and facing a life with the odious Mr Collins, rather than that of the penury as a single woman. She is incredibly watchable.  I would rather like her to be my friend. 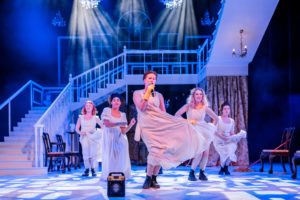 Christina Gordon is the beautiful Jane Bennet and Tori Burgess is charming as the hapless book worm Mary and the feckless reckless, Lydia. Felixe Horde is Kitty and the cad George Wickham. All talented actors.

Meghan Tyler is the gorgeous and feisty Elizabeth Bennet. In the original book she goes walking alone through the countryside without a chaperone. In our version of Pride and Prejudice she is drinking and smoking and swear in her lilting Northern Irish accent.

A whole lot of balls

The show is peppered with Karaoke songs that fit in with the story  like ‘Your So vain’ ‘Young Hearts running free’  ‘Everybody knows that I love you.’  The balls which punctuate the narrative are one of the few ways people got to meet potential partners back in the day. The finger food at the said events varies in the show, indicating the status of the gathering. It starts off as cubes of cheese on cocktail sticks and hula hoops at the Meryton ball, escalating to Canada Dry (what is that?) and Ferrero Roche at the really posh Pemberton social. These little details add to the jigsaw of so many things to enjoy in this production. 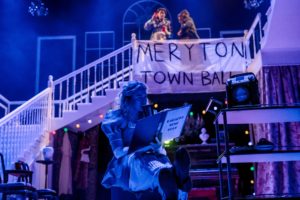 Men are figures of fun, and yet the world of the women must necessarily revolve around them. Mr Bennet the head of the household is represented merely by a newspaper and an armchair.

I loved this production from start to finish. The script has much to say about gender roles and the constraints of life in those simpler times. While it is absolutely hilarious, it is also clearly written by someone who loves the source text.  If you get the opportunity to see this show you must wrench yourself from Netflix and chill and get out to see this formidable piece of life theatre at its very best.

The show is a Tron Theatre Company and Blood of the Young production, with co-producers Birmingham Repertory Theatre, Bristol Old Vic, Nuffield Theatres Southampton and Oxford Playhouse. Book your tickets for the show from Northern Stage here 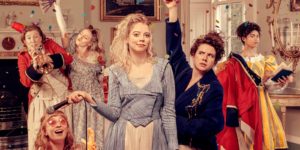