The Handlebards – Shakespeare on a bike!

Spreading the word that Shakespeare is fun, the Handlebards are a unique troupe of intrepid actors who cycle around the country, performing the Bard’s best comedies at outside venues.

The team carry all the set, props and costumes needed to perform the plays along with them, and have now pedaled over 1,000 miles around the UK from place to place for your entertainment!

There are four troupes of extremely energetic bards, cycling about the country. The girls teams and the boys teams each present a different play. The girls performing Romeo and Juliet this year, and the boys are tackling Twelfth Night.

I Twelfth night, with the unique background of Northumberlandia, otherwise known as the Lady of the North, which is a huge land sculpture in the shape of a reclining female figure up in beautiful Northumberland.

The Handlebard’s version of Shakespeare is about as accessible a version of our greatest playwright as you can get. Highly energetic, fast furious and funny, the boys made the most of every second of physical comedy. This an entirely environmentally sustainable performance!

There are only four actors in the cast, but they cover a multitude of characters. Quick fire pings of a bicycle bell herald a swift change of props or costume. As more characters are required, members of the audience are drafted in as needed. A character may be represented merely by a disembodied hat or jacket for a whole scene.

The Handlebards – fast and very funny

The Handlebards are fantastic at engaging the audience. On the command ‘STORM!’ some folk in the front row throw small bowls of water in the faces of the actors. A lot of stealing of food and booze from assorted picnics in the crowd is also evident.

All kinds of food and drink are incorporated into the play as they go along. No one seems to mind when their comestibles are swiped by the mischievous boys. When Malvolio did something suggestive with a cherry Bakewell during our performance, everyone joined in with the joke.

Comedy at its best

Even parts of the bikes are used in the play. A cog turns up as a ring, a bike light as a precious jewel. The curate’s cross appears to be made of bicycle spanners.

As a repertory company, the Handlebards were formed in 2012 by Paul Moss, Callum Cheatle, Tom Dixon and Callum Brodie.  In 2013 they embarked on their first cycling theatre tour. They pedalled Romeo and Juliet and Twelfth Night  967 miles from Glasgow to London, performing in outdoor venues across the UK.

In 2014, they went further afield cycling 2000 miles across the UK, the Netherlands and Belgium, performing Macbeth and The Comedy of Errors to over 6000 people at 50 venues. They have even been to India – although I doubt if they pedaled the whole way there.

One production saw the bards provide their audiences with bicycles, so that they could cycle along through Edinburgh to a hidden location to watch them perform! Music is a big part of the performance – the Ukuleles are regularly wheeled. The boys are all rather good singers too! 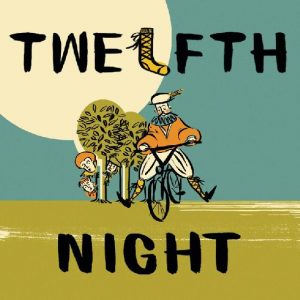 As anyone who has been involved in it will tell you, outdoor theatre is a physically challenging genre. To actually cycle from town to town, carrying everything with you on a bike, gives an even more athletic dimension to the proceedings.

The bards have even fallen off their bikes from time to time, and had to effect running repairs to their trusty vehicles. Towing a trailer on a pushbike uphill is no mean feat. I salute their cycling prowess!

Who are the boys?

The boys are: Luke Wilson  who makes for a very funny cross gartered Malvolio, Mark Collier who is both Viola and Sebastian at one point or another (also the owner of the exploding balloon breasts)  Ross Ford who makes for a very winsome, if somewhat muscular, Olivia, and William Ross-Fawcett a compact dynamo of acting eccentricity.

The cast cavort, chortle and camp about, while spouting Shakespearean verse with perfect ease.  It’s all jolly good fun and a bit like carry on camping meets the RSC.

Update – the Handlebards are back in business with socially distanced performances in August!