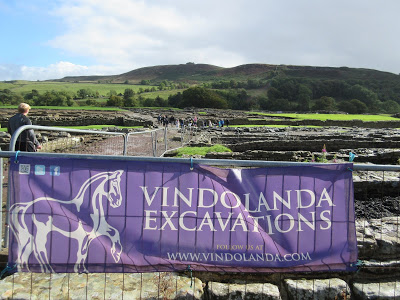 Vindolanda, is a 2000 year old roman frontier fort on Hadrian’s Wall in Northumberland. It is a real labour of love for the Birley family who live and breathe Roman history. Eric Birley bought the land and began excavating it back in 1929. Later, his son, Robin Birley, became director of excavations.

Now, in turn, his son, Andrew, takes on this role and his wife, Barbara Birley, is the museum’s creator. Barbara is originally from Colorado and came over to excavate at the site quite some years ago now, which is where she first met Andrew.

Excavations have been happening here for over 45 years. Treasures revealed have given us a remarkable insight into the daily life of the people who lived here, all those years ago during the time of the mighty Roman Empire.

Although I have lived in the area for years I had never actually visited Vindolanda! It’s less than an hour’s drive from Newcastle, so my visit was long overdue. The site is a charitable trust and museum.

You can wander about the stone remains of the fort and its domestic buildings. You may even get the chance to watch some of the live excavations which take place there every year. New artefacts are discovered here every year by the archaeologists and most of them are displayed in the museum

Places on the two week excavations which run throughout the season, are very much in demand. Sold out in minutes, they attract archaeologists and enthusiasts from all over the world. They all want to seize at this rare chance to dig for historical gold at a real Roman fort.

At the bottom of the hill through some lovely gardens, you will find the compact and very user friendly museum. Marvel at the many artefacts discovered here carefully housed and displayed on site.

Extra special are Vindolanda’s most famous treasures – the Vindolanda tablets which are actual communications from people of the time written on very thin pieces of wood.

Each tablet is about the size of a postcard. The writing is done with black ink and a pen made from a reed. The tablets were then folded to protect the writing and the address was written on the outside.

The tablets document business transactions. Some are lists of things that have been ordered from home like socks and beer. There is even a birthday party invitation.

Some of the original tablets are kept here at Vindolanda in a cabinet with a specially regulated atmosphere The rest are at the British museum. You can also read the translations from the Latin of all the tablets, which are quite fascinating.

The view from the fort is stunning. High up there in the wilds of our beautiful Northumberland countryside there is a great panorama of open rolling fields and hills.

Vindolanda – who were the Roman Army?

The fort you can see today was built on top of several others and it was the constant renewal of the site which helped to create the special anaerobic conditions which have preserved things so well.

Other items found at the site include lots of jewellery, pottery and coins and even thousands of ancient shoes. According to Barbara, many of the shoes are a size thirteen and larger so the soldiers here were big strong men.

‘When I first came here, I thought that the Romans would be all be skinny Italians in togas’ she said, ‘but the soldiers here were professional fighters who were from places like France, the Netherlands and Belgium.’

One military tribe, the Batavians, of Germanic origin, were accomplished horsemen. They were said to have swam in full armour next to their horses across to Anglesey in order to surprise some unsuspecting Druids.

These auxiliary soldiers had to sign up to the Roman army for a mere 25 years. If, after a quarter of a century they are still alive, they can marry and become a Roman citizen at last!

The Roman Army museum is 7 miles North from Vindolanda. It is a very interactive museum which is very informative and also lots of fun. It brings to life how the soldiers would have lived and worked on this northernmost frontier barrier of the Roman Empire.

There is a hologram presentation of a centurion –  Africanus. His character comes to life and he explains the benefits of joining this most prestigious army.

You can also view an award winning 3D film ‘Edge of the Empire’ which gives us an eagle’s eye view of how Hadrian’s wall may have looked in its heyday.

Soldiers in the Roman army were drawn from all over the world. A group of specialist archers, the Hamians were even recruited from central Syria and became part of the British garrison. We’ve always been a multi-cultural society it would seem.

Hadrian and his wall

Hadrian’s Wall is mainly stone, but also included large sections made from turf, earth and timber. It is said that Hadrian built the wall to keep out the barbaric Scots, but it may also have been a bit of a vanity project for him to show off his power and strength.

The wall could also have been meant to protect the region’s natural resources such as lead, which were of great use to the Romans. No one really knows.

What I do know is that Vindolanda and the Roman Army Museum make a great day out! They are open all the year round and even if you are not a budding archaeologist, there will be something there to interest you.

There are some cracking museum shops and cafes too for essential refreshments. I cannot recommend the Roman cheese and onion toasties highly enough.

Concealed beneath farmer’s fields for centuries, Vindolanda continues to provide a fascinating gateway to our past. It is a huge site and it is exciting to think that there are many more secrets yet to be discovered.

Stay at lovely Air BnB Newfield cottage if you are visiting the wall!