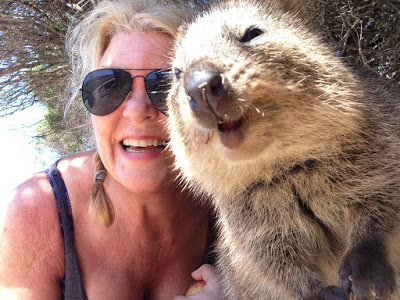 Rottnest island home of the Quokka

It’s official, the Australian Quokka, with its super smiley furry face is the happiest animal on the planet. Everyone who travels there across the bay from Fremantle in Perth, on the Rottnest ferry wants a selfie with them. It’s really become quite a thing – even Roger Federer on his visit to play in WA met up with one of the locals!

Rottnest Island is known as Wadjemup to the local Noongar people, and ‘Rotto’ to the Ozzies. It is 11 miles west of Fremantle and covers a mere 7.3 square miles. Rotto has its own Island Authority and no cars are allowed on the island (other than a few services vehicles and tourist buses.) Pushbikes are the favoured mode of transport..

Visit the Quokka on the Rottnest Express

To get there you need to hop on The Rottnest Express.  There are daily ferry services from Perth and Fremantle to the island. While the crossing isn’t very long, things can get rather frisky due to the windy conditions here.

This can make you feel a bit queasy. It doesn’t really help when the broadly smiling crew member comes around offering sick bags to passengers either. Best advice is to fix your eyes on the horizon and concentrate on the rainbows that appear in the spray. I have never been the best sailor and it helped me.

This low lying island is a protected nature reserve and home to the world famous Quokkas, a vulnerable native Australian species. The Quokkas only exist in small pockets elsewhere, and Rottnest island is home to the last large population of them anywhere on earth.

The Quokka – friendly but vulnerable.

This small furry marsupial about the size of a cat, hangs about in the bushes all over the island. You are most likely to spot them at the side of the road. Finding them is easy as they have very little fear of humans, and seem to be naturally friendly and curious animals.

We came across several little parties of them, some with mums and baby micro Quokkas, which are adorable. They hopped over to say hello, explore our bikes and try to sniff out food in our rucksacks. You’re aren’t supposed to feed them at all and I was admonished by the local wardens for giving a small piece of apple to one. Even though it was a Western Australian apple.

The quokkas have brown and grey rabbit like fur, and quite short fur covered tails. They also have the cutest little ears and round black teddy bear eyes.

Quokkas and their million dollar smile.

Quokkas possess the quite astonishing ability to smile and so selfies with smiling Quokkas have become an internet sensation.  This apparent ability to smile at us, has given them the reputation of being ‘the happiest animals on the planet.’ Of course I couldn’t resist rolling around under the spiky bush in the Quokka poo with my selfie stick, getting attacked by large horse flies. to achieve the perfect snap with these charming animals, and my chosen quokka did not disappoint!

Rottnest island separated from the mainland about 7,000 years ago and is home to a number of bird species including the osprey, and we actually saw one sitting on its nest atop a pile of sticks on a rock while we were there. The island has colonies of Australian sea lions and southern fur seals. It is also home to three endemic tree species, notably the Rottnest Island pine. Human artifacts have been discovered here dating back at least 30,000 years. However the island was unihabited when the Dutch sailors discovered it.

Other than the adorable Quokkas, the island’s coastline is dotted with the most beautiful little coves and beaches. Pure white sand fringes the turquoise seas. Rock pools make shallow reefs and bands of water creating different patches of lighter greens and blues. It makes a great view from the clifftop road in the stunning sunshine. As pretty as anything you will see in the Caribbean, Rottnest island has a lot less people too!

You can hire bikes or take your own on the ferry crossing, and there are about 11 miles of safe cycling all the way around the island, up and down on quiet roads and to and from all these lovely little beaches. We weren’t quite sure what the name was of the one we stopped off at, for a bit of a rest after some vigorous pedaling, but there was literally no one else there when we arrived. It really is like paradise, Robinson Crusoe would definitely have approved.

There are quite a few hills to tackle on Rotto so it’s does take a bit of effort to cycle all around it, and I struggled a bit up the very steep hill to the Wadjemup lighthouse. It was worth it though, I do love a lighthouse.

Beaches on Rottnest include Ricey beach, Parakeet and Porpoise Bay, Crayfish and Fishook Bay and of course of particular interest to me, Wilson Bay and Geordie Bay!

We do have some lovely beaches on our North East coast at home, but not quite like this one here…

The crystal clear waters, fine powder white sand, coral reefs and unique wildlife make this a very special place indeed. Access to Rottnest is carefully controlled and while there is some accommodation here, it is limited and quite expensive, so things have remained largely unspoiled.

Rottnest island – a great day out

The old buildings from the 1800’s give the place a rather quaint air, and the happy Quokkas largely have the island to themselves after the last ferry has gone.
We rode back into Thomson Bay to catch our ferry home and I partook of a salted caramel ice cream courtesy of Simmos ices, and there are so many flavours, it is indeed a delicious dilemma.

Prettier than any picture, and home to the uniquely adorable Quokkas, Rottnest island is a hidden gem. A visit to this special destination is a must do if you ever get to travel to Perth in WA, on this spectacular sunny, side of the world.