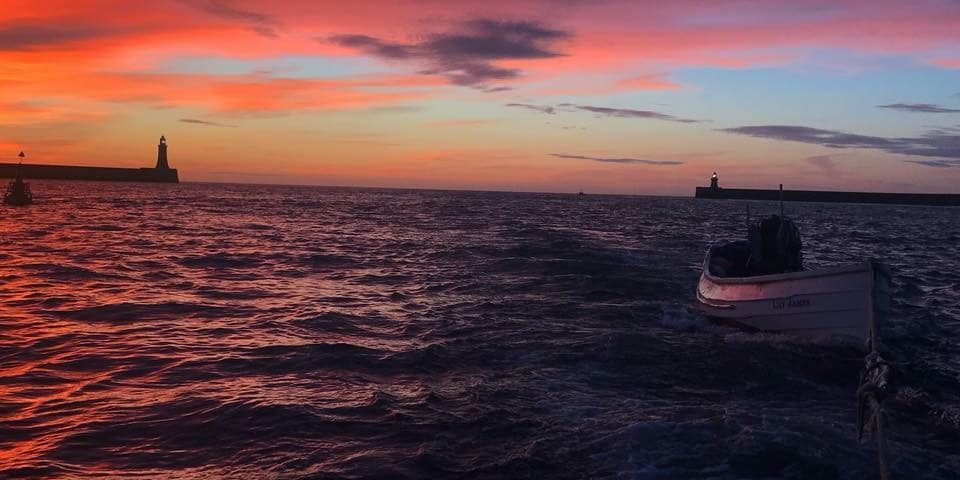 North Shields Fish Quay dates back to the 13th Century.  Fast forward to today and it is a lively spot with a working fishing port mixed with a number of chic eateries. There’s the Ships’ Cat, the Salty Dog and the Red Wolf (Lobo Rojo) The Lobo Rojo is actually a Mexican place. However, it must be mentioned as it does the best margaritas outside of Mexico!

The Fish Quay is definitely the place to be if you’re a seafood fan. With numerous wet fish shops selling freshly caught fish and shellfish, fish and chips restaurants and takeaways and many speciality seafood dishes from the various restaurants, you’re spoiled for choice.

North Shields Fish Quay is famous for it’s fresh fish & seafood market and particularly for its prawns (langoustine) which are shipped in huge amounts to the rest of Europe. You  may find yourself on holiday in Spain or Italy eating seafood in your paella or risotto which has come from here .

The Fishermen’s Mission, along with an array of wet fish shops is a reminder that the Fish Quay is still a working environment. The fishing industry in general may have declined across the region, but the Fish Quay can boast of being the largest prawn port in England.

People come here to play on the sand and watch the ships pass by. This is where you can park-up the car or lock-up the bike and enjoy the views, fish and chips and ice cream.  Birdwatchers are drawn here, able to get close to species such as Turnstone and Sanderling. It is also the starting point for walks and of bicycle rides on this section of the Coast to Coast route.

Here ends the coast to coast (C2C) cycle route. The etiquette is that you dip your cycle wheels in the sea when you have completed it.

Lifeboat volunteers have played a vital part in the safety of those at sea over many years.  For centuries the mouth of the Tyne was a place of shifting sandbanks and dangerous rocks. Most feared of all were the notorious Black Midden rocks.

According to local folklore, these rocks were thrown there by the devil in an attempt to curb the wealthy sea trade of Newcastle, a competitor to the Fish Quay.

Usually covered at high tide, the Black Middens have been responsible for many shipwrecks. Over the years they have caused the death by drowning of hundreds of mariners and their passengers.
During three days of blizzards and storms in 1864, the Black Middens claimed five ships and 34 lives.

The first ever Volunteer Life Brigade service was established here at Tynemouth in 1864. There is a small, rather cute museum here. It tells the story of the very first volunteer lifeboat station in England.

There’s a lot of seaborne traffic in and out of the mouth of the Tyne. Huge cruise ships sail up and dock at the Royal Quays. Fishing trawlers and boats which lay cables out to sea also pass by. The ferry goes back and forth to South Tyneside on the other side of the estuary. Living at he Fish Quay is popular now and there are new flats right on the quay. The old lighthouse is converted into a luxury abode. Despite the down turn in the fishing industry, North Shields Fish Quay has adapted and survived.