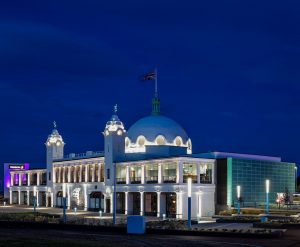 Whitley Bay is a fine sea side town on the glorious North East coast. Known as the North East’s Blackpool, it was a top holiday destination for local families in its heyday. Over the years, as happened to many of our coastal communities, the town became a little dog eared around the edges.

Post Corona virus we will all be wondering what to do with our unlocked selves. Our local businesses will have suffered and need our support to kick start us into summer! Don’t forget sometimes the very best places are right on your doorstep!

Whitley Bay has never lost its charm and is now undergoing a renaissance. Here are six reasons why you should visit as soon as you can! 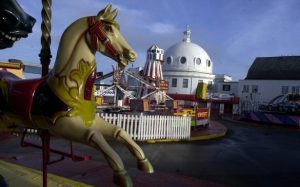 The famous Spanish City dome , fully refurbished is now reopened, after the best part of a couple of decades. A prominent feature of Whitley Bay, the large white dome of ‘Spanish City’ is a symbol of a thriving entertainment venue of yesteryear. Spanish City is called so because the Toreadors concert party troupe performed there, and it kind of stuck. 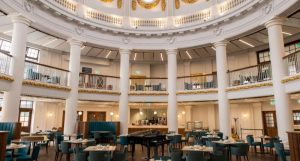 Formally opened in 1910 Spanish City was at first a concert hall, restaurant, roof garden, and tearoom. When it was built it was believed to have been the second-largest unsupported concrete dome in the UK. The first is St Paul’s Cathedral. It is now home to Trenchers fish and chip restaurant and a range of bars, cafes and function suites.

The Spanish City fun fair was right behind the iconic dome.  It was immortalized by Dire Straits in their 1980 song, “Tunnel of Love,” which was thereafter played every morning when the park opened. Spanish City was incredibly popular.  It featured waltzers, a carousel, the corkscrew roller coaster and the Hill Billy Shoot Out just to name a few (as well as the Tunnel of Love) 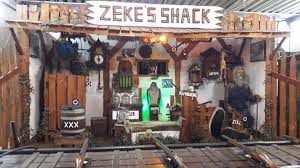 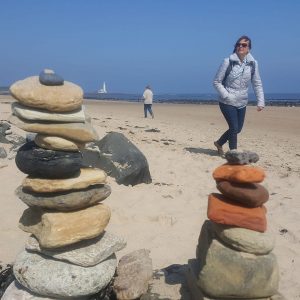 Just now we are all living through unprecedented times and our movements are restricted to try and combat the spread of COVID-19. The residents of Whitley Bay have been taking the air down on their local beach to keep themselves sane and healthy. Strange stone stacks have started appearing all along the beach for quite some distance.

Built by families and individuals this stone balancing act has really caught on. Apparently Stone stacking is a meditative artistic skill which can be produced anywhere, with a growing global movement. Stone stacking utilises the materials found in nature and balancing uses nothing more than the natural gravitational pull of the Earth. It certainly creates a fascinating feature to add to this beautiful beach. Who needs the Arts Council? 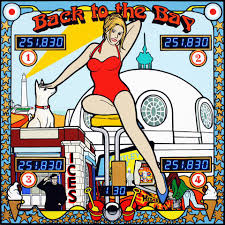 The Whitley Bay Film Festival at the end of August is possibly my favourite event of the whole summer.  In a town without a cinema, a plucky band of film lovers set up the festival in 2010, with a mission to stage something extraordinary in this North East seaside destination.
From the humble origins of organising a screening of Jaws on the local beach, the Festival has gone from strength-to-strength and now delivers an annual programme of seminal films in unique settings with an imaginative twist.

Venues used include St Marys Lighthouse, the Jam Jar Cinema and Seaton Delaval Hall. In 2018 we saw Nosferatu screened in the ancient hall of the Delaval mansion complete with original electronic soundtrack and actual bats which appeared at just the right time. It was an unforgettable experience. 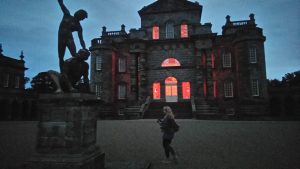 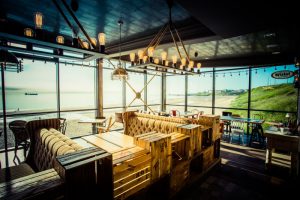 This is a relatively new eatery right on the beach. A family run business, the View is a lovely place to relax, eat and drink. As its name suggests it has the most spectacular views out to sea.

It is at the North end of the beach on Tynemouth Long sands, and looks out towards Cullercoats and Tynemouth Priory/Castle and Pier.

The view is open for breakfast and later serves everything ranging from Seafood Pastas to Homemade Pizzas. Or you can just have a coffee made by a View barista, and soak up that life affirming coastal view. 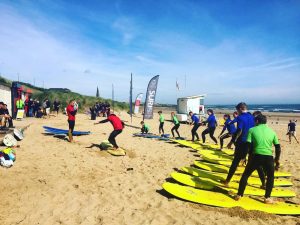 The beach at Tynemouth Long sands is a wide arc that takes the full force of the North Sea. At one end, snug among the rocks like a shipwreck, is the disused lido and at the other stands St George’s church. The beach is a hub for surfing in England’s North East.

Tynemouth has produced some well known British surfers, including four-time British surf champion Gabe Davies and Nigel Veitch, the original North East pro surfer. The special thing about Tynemouth is the mix of people, of all abilities, using the same beach.

Situated on the seafront above the award winning Tynemouth Long sands beach it provides a one stop shop for all of your surfing needs.

The surf school is really popular providing beginner to intermediate lessons for individuals as well as tailored courses for schools, parties and groups 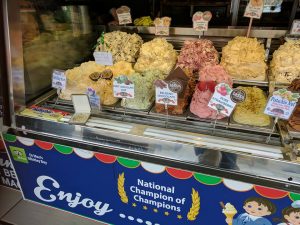 For award-winning ice cream look no further than Di Meos in Whitley Bay. De Meos have an awful lot of ice  cream and an awful lot of flavours to choose from.   Di Meo’s ice cream parlours were among the winners at the National Ice Cream Competition. They won two awards for its Pistacchio Crunch ice cream and an Artistic Award for a ‘Going Back to School’ themed ice cream cake.

Discovered by the Romans, Gelato is Italian for ice cream, and is a natural luxury . Today’s recipe is a result of four generations of ice cream making by the Di Meo family. Homemade Gelato is for sale, fresh every day. It follows the secret family recipe dating back to 1925.

Like their ancestors, they continue to use only the finest ingredients and the creamiest milk which has been sourced from local dairy farms. Di Meos is quality, fresh traditional ice cream, a real seaside treat.