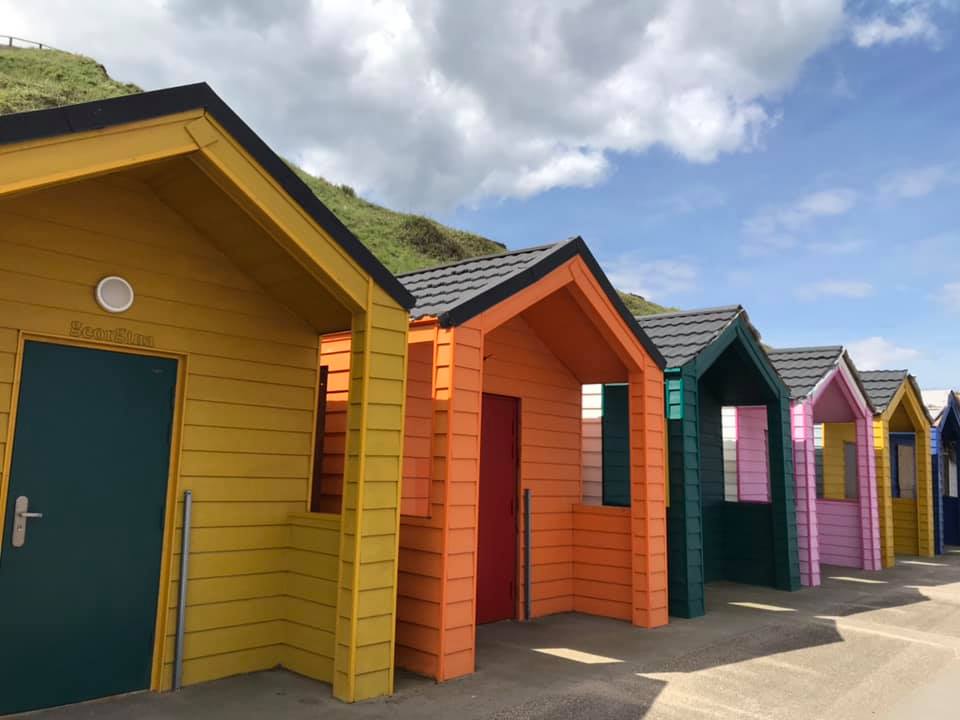 Saltburn-by-the-sea, could be Yorkshire’s most charming seaside town. Smaller and much less crowded than other well known destinations like Whitby and Scarbrough, it has a spectacular setting with some unique features and an up and coming vibe. I visited for the summer solstice, the longest day of the year. The weather was gorgeous and what a lovely day we had!

The Saltburn Cliff Lift is one of the world’s oldest water-powered funiculars—the oldest being the Bom Jesus funicular in Braga, Portugal. After the opening of Saltburn Pier in 1869, it was observed that the steep cliff walk was deterring people from walking from the town to the pier. The cliff lift proved to be the best solution. The Saltburn tramway, is water-balanced and since 1924 the water pump has been electrically operated. The lift was closed last year for refurbishment and has just been reopened this year in time for the pier’s 150th birthday. The tram carriages have beautiful hand made stained glass windows and Martin the tram man was super friendly as we set off on the ride up the 75% incline!

Saltburn has the only pier in Yorkshire and it is a real Victorian affair. It has the obligatory amusements at one end and fishermen at the other (I’ve never seen a fisher woman) The fishermen told us they often see dolphins and seals. A basking shark visits once a year. The famous Saltburn Yarnbombers who knit marvelous creations in secret and then attached them to the pier are back! There’s a new cohort of seaside characters for 2019. I absolutely love these little knitted artworks. There were suffragettes, Punch and Judy, sailors, swimmers, fish, mermaids turtles and jelly fish. There was even a knitted version of the whole pier itself!

The bijoux town centre is perfectly charming. There are lots of individual shops selling crafts, clothes, artisan foods and pastries. The famous chocolinis sells the most amazing hand crafted chocolates all fashioned on the premises. Sue the manager showed us her chocolate fish and chips, and they also do a nice line in Star Wars chocolates. These include a chocolate Storm Trooper and a chocolate Millenium Falcon!

The railway station buildings are now occupied by local businesses. What was the ticket office is now a specialist vegetable shop and delicatessen. Another station building has now become  Signals – coffee shop by day and bistro by night.

We had a lovely meal in Signals and were also wowed by Tom Daws, a street magician who stopped by our table and did some amazing close up card tricks. I tried really hard to catch him out but failed miserably. At one point I ended up with a black magic marker cross on my hand and I have NO IDEA how it got there!

The Victorians loved their gardens and their sea air strolls. Saltburn still has amazing coastal views from the top of the cliffs, and a thriving arts and music scene too. As soon as the sun is out, people are on the beach. Horses were there early on trotting along with the off shore wind farm actually looking rather picturesque in the distance.

The Saltburn surf school was out in force when we were there and folk had their windbreaks and their summer outfits on display promptly in the morning. There are some original 1920’s beach huts for hire on the beach side but also some new incredibly colourful ones available too. A group of ladies were breaking out the Prosecco at about 11.30am and everyone was in a jovial mood. The people here are very friendly indeed.

Our visit to the delightful Saltburn-by-the-sea, was a most charming English interlude. It was so much fun to stay on the pier on the summer solstice and there was still light in the sky at 11.30 pm. When it’s like this, there is no better place to be than England.