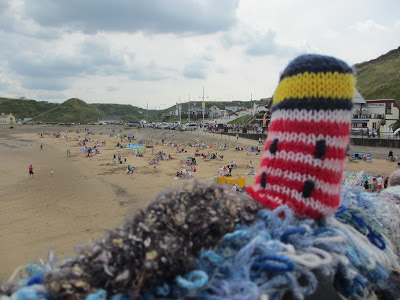 Saltburn on sea – the yarnstormers!

Saltburn on sea has a fabulous victorian pier. Never mind Banksy, have you heard of the Saltburn Yarn Stormers? They come secretly in the middle of the night and decorate Saltburn’s Pier with a sleeve of amazing colorful knitted creations.

This year the knited figures are a celebration of all things sea-sidey. Mermaids, starfish, lobsters, lighthouses and seaweed. There are swimmers, sun bathers and even two rather cute seaside donkeys named Knit and Purl.

The yarn stormers have previously decorated the pier with figures from the both the Jubilee celebrations and in 2012, the Olympics. They are beautifully hand crafted, imaginative and humorous.

This is the kind of street art, or should I say Pier art, that everyone can enjoy. The mystery is part of the fun. No one knows who the ‘Yarn Stormers’ are, or where they come from, but they are very popular with the locals.

One particularly funny sunburnt man in a deckchair was knit-napped from the pier by a callous thief. A photo of him had been left in his place with the message ‘I was stolen by a fool, but I will regenerate!’

Guerilla knitting appears around the world. It often transforms unattractive urban environments into places of quirky colourful wonderment.  No one does it quite like the Saltburn on sea Crew though.

Saltburn is home to a rare genuine Victorian water balanced cliff lift. You use it to get you to the top or the bottom of the hill without the bother of the walk.

This one is probably the oldest working model in the world. Each of its two cars is fitted with a water tank and run on parallel tracks. The car at the top of the 71% incline has its tank filled with water until it overbalances the weight of the car below.

It then proceeds in a stately fashion down the steep hill under the weight of its own specific gravity. When the car reaches the bottom the water is pumped back up to the top.

The entire operation is controlled by the brake man from his little cabin at the top of the lift. In my view the ride is worth £1 of anybody’s money.

Another unique feature of this charming Victorian town is a group of 20 original Art Deco beach huts. Built of brick with slate roofs in 1935 they have survived totally unaltered. They are good examples of architectural design from the time between the two World Wars.

Although looking a  little bit shabby now, I can’t help thinking that if they had been on Brighton Beach they would have been jazzed up and on sale for a hundred grand or so each…

You can rent one from the council for £700 a year. Now beach huts are back in fashion there is some dispute about who gets them when, as some people have been on the waiting list for over 10 years.

Apparently another block were completely demolished a few years ago as no one wanted them at all! I spoke to a chap who said he has had one of the huts for thirty years and used to come down to the beach with his wife and the children they fostered. ‘Some of them had never seen the sea,’ she said ‘They loved it here.’

Go to Saltburn on sea!

Saltburn is one of our gorgeous English East Coast seaside towns. Once awash with visitors every summer, it now has to compete with cheap package holidays abroad. This summer has been different.

The weather is great and the beach is a great big party of wind breaks, buckets and spades and packed lunches. Families areenjoying themselves in the old fashioned way.

Saltburn on sea, with its picturesque setting under the shadow of Hunt Cliff still retains a  Victorian charm. It has it’s pier, a cliff lift, plus a beautiful,  pristine beach. There’s also a thriving surfing community here and of course, a cracking fish and chip shop!

Many of our seaside towns still have a rather sad, dilapidated feel to them but Saltburn doesn’t feel that way all. I adore the vintage posters produced by the London and North East Railway in the 1930’s to promote rail travel to the East Coast.

New beach huts are now available for hire at Saltburn – they are bright colours and all have separate names – checkout how to hire them here..