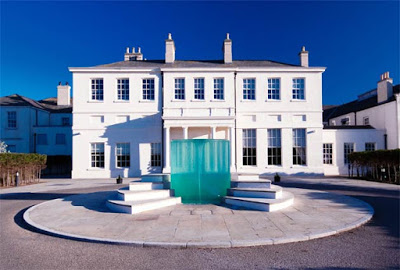 This coastal hotel is a very stylish surprise of a hotel restaurant and spa in this modest North Eastern coastal town. A stone’s throw from the sea, the Hall has an equally surprising history linked to the industrial revolution and even Scottish whisky smugglers!  It was even the home a very famous Romantic poet for a short while. It’s address is Lord Byron’s walk, which gives you a bit of a clue.

The Hall hosted the marriage of Lord Byron to Annabella, the daughter of the Milbanke family – the original owners of the hall in 1815. It wasn’t the happiest of marriages. Byron was off to the sunshine of the Mediterranean before long in pursuit of love and adventure. He did however produce a daughter from that union, Ada Lovelace, who became a prominent mathematician. She was involved in working in very early computer science.

The Hall was used used as a military hospital in WWI and has even been a care home in the past. In and out of public and private hands over the years Seaham Hall has now been completely restored and refurbished with a three million investment.  Its claim is to be the finest 5 Star hotel in the North East of England.

The large and luxurious Spa has been voted one of the top 100 spas in the UK. It has a 20 foot heated pool, outdoor Jacuzzis,a hydrotherapy pool, steam rooms, saunas and plunge pools. This gives you a huge choice of watery relaxation options. The spa also has a range of luxurious treatments on offer. You can book treatments if you are just here for a day, or if are lucky enough to be staying overnight.

The cellar at Seaham Hall has an extensive collection of fine wines from around the world. It also houses the Hall’s collection of the famous Spey Whisky. This Whisky was smuggled from a network of underground caverns which run under the hall. It was sent across to the US during the years of prohibition in America.

Alec Harvey, a descendant of scotch whisky distillers loaded up Spey whisky at Seaham Harbour bound for New York and Chicago via the Bahamas. A whisky tasting session can be arranged upon request.
Spey single malt whisky is available today at Seaham Hall and it is also very popular in the Far East and at Kensington Palace!

There are a number of delicious options for dining at Seaham Hall. A pan Asian eatery (Ozone) serves the spa area. The main restaurant in the hotel is called Byron’s.  Here the focus is on an innovative menu inspired by fresh local ingredients.

The menu features such local specialties as Hartlepool landed crab. I had the delicious braised beef cheek with wild garlic pearl barley followed by a poached Yorkshire rhubarb sorbet with baked custard and tarragon granite.

There was even a Gorse flower Baked Alaska on offer. I didn’t know you could eat Gorse flowers which are a bright yellow feature everywhere along the North East coast. The food is nothing short of superb.

The small number of rooms keeps the Hall feeling like a very personal and friendly place to enjoy a special break. This boutique venue has twenty two individually designed luxurious suites, including a penthouse which attracts famous pop stars visiting the area. One Direction stayed when they played at the Stadium of Light and apparently Harry Stiles very much enjoyed his swim in the pool! One suite was designed beautifully in seaside colours of purple, green, pale blue and taupe. Birds and butterflies feature in the soft furnishings and pictures.

Seaham Hall has been listed as one of the ultimate 100 British hotels and it’s easy to see why. A stone’s throw from the sea there is a lovely peaceful atmosphere, and the staff are extremely friendly and helpful. While you are here you can pop into the seaside town of Seaham itself. Why not sample an ice cream cocktail at Lickety Split’s ice cream parlour or comb the beach for a piece or two of the famous Seaham Sea Glass. A great place to stay, eat and relax Seaham Hall has it all!

Looking for another premium North East Hotel? Check out out the super Eco friendly Battlesteads Hotel in Northumberland here