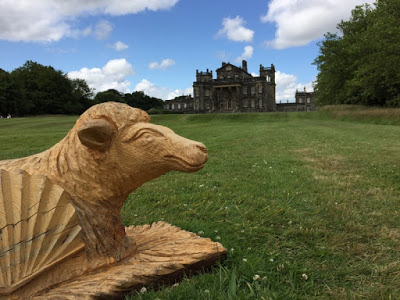 Seaton Delaval Hall was built as probably the world’s most ostentatious retirement home. Admiral Delaval started its construction in 1728 near the village of Seaton Delaval in the North East of England. It has as dramatic and colourful a history as its very eccentric aristocratic owners.

The main hall was burnt down in an accidental fire. The last of the Delaval family lived in the remaining wing. it was In danger of being sold off to property developers, after both Lord and Lady Hastings died in 2007. They were direct descendants of the Delavals on the female side.

The local community was inspired and rallied to save the Hall, starting a great fund raising effort. It was finally taken over by the National Trust in 2009. They have set about restoring its unique features and telling the story of the Delavals to new twenty first century visitors.

The Hall and gardens

On the day of the Men’s final at Wimbledon, there was Pimms and cream teas in the summer house. Visitors sat on National Trust Deck chairs next to the lily pond and listened to the match on the radio. So civilised!

The gardens are quite beautiful. Full of cottage garden flowers and roses beds. The tiny ancient chapel of Our Lady in the grounds is almost 1000 years old. It is adorable.

The Hall itself is packed with fascinating objects and furniture from different periods of history.  Beautiful detailed tapestries upholster chairs lining the west wing gallery. They tell the tale of a Delaval off to war. Commanding portraits of other family members hang in the gallery. They all have a story to tell.

The local volunteers very enthusiastic and full of useful information. You really have to ask them things to get the most out of your visit.

I took a particular shine to John Seymour 83, a local historian who had previously studied the Hartley Pit disaster which happened nearby. John stations himself in the  mahogany room, one of the few which actually survived the great fire.

He was looking after lots of old documents from the hey days of the Hall. He proudly displayed a special key which was made featuring a silhouette of the grand house itself.  It was awarded to those who had helped to raise funds to save it from oblivion..

Seaton Delaval Hall – dining in with the Delavals

Many fascinating documents survive. I loved the original and entirely eccentric dinner menus. They featured dishes such as ‘Invisible greens,’ ‘Soles and Eels,’ ‘Mock Turtle soup,’ and ‘Sham Hippopotamus.’ Other delights included ‘Leg o’ nothing (boiled),’ ‘Pat my gun Piggy Wiggy’ and my favourite – ‘Shake ass and go imaginary stew!’ Heaven knows what was in that!

The recorded orders for provision of prodigious amounts alcohol were nothing short of impressive. 65 bottles of port wine were ordered for one picnic alone. The beer order showed that 1,160 pints a day were being quaffed.

The Delavals certainly knew how to party. I can’t help but think that these would have been memorable gatherings. Rather like a scene from Alice in Wonderland.

The Delaval family owned the estate since the time of the Norman conquest.  Admiral George Delaval bought it from an impoverished kinsman Sir John Delaval.

George Delaval had made his fortune from capturing prize ships while in the Navy, rather like a pirate. He had also served as a hostage negotiator when he effected the release of some 200 British hostages from actual Barbary pirates, who were marauding the South coast.

The architect of Delaval Hall was the celebrated John Vanbrugh who also designed Castle Howard. Vanbrugh advised complete demolition of the old building. All except the ancient chapel close by. A total rebuild began.

The construction work finished in 1728, two years after the death of the Admiral. The resulting new mansion was the last country house Vanbrugh designed, and it is regarded as his finest work. On completion, the Admiral’s nephew Francis Blake Delaval (the elder) inherited the property, and moved in immediately.

During its lifetime Delaval Hall wasn’t lived in a great deal. This was because in 1822, the central block was gutted by a fire. It was said to have been caused by jackdaws nesting in the chimneys of the section of the south-east wing.

One of the guides explained that Delaval had sent word that he was coming home and to put all the fires on to warm up the hall. In the servant’s enthusiasm it all went horribly wrong and they heated the hall up just a bit too much.

The effects of the fire remain clearly visible in the great hall, but despite having no roof for over 140 years the place is still standing. The 10 foot tall muse statues display understandable signs of wear and tear.

The Hall housed German prisoners-of-war, being put to work as labourers on neighbouring farms during WWII.

Sir Francis Delaval, one of the hall’s most colourful inhabitants liked wine, women and song. He was also a greatpatron of the theatre. He shot coins out of a cannon to buy votes for himself as an MP.

Francis took a bet that he couldn’t build a castle in day which he actually did. Its remains are still there in the grounds. Although not the most sensible custodian of the hall, but probably the most entertaining.

Today, Seaton Delaval Hall is a perfectly charming place to visit. Beautiful grounds, a tea shop a little second hand book outlet and a whole heap of history. Don’t miss it this summer!