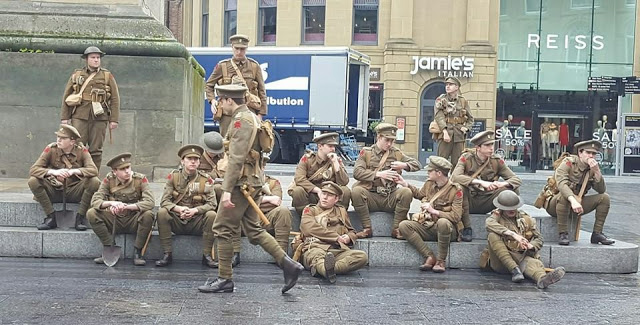 The Battle of the Somme

Nearly 20,000 men died on the first day of the Battle of the Somme. WW1 on the 1st July 1916.  On top of the terrible death toll, there were more than 30,000 casualties. Many sustained life changing injuries.

How can we possibly remember this and pay tribute to these, mainly young men, who were slaughtered in the service of their country? Well, with 1418NOW Turner prize winning artist Jeremy Deller in collaboration with Rufus Norris, the Director of the National Theatre, has created a powerful engaging piece of participatory theatre, which does just this.

Not just a genius concept, this is an outstanding piece of original live visual art and its effect is simply the most moving tribute to these men. It connects with its audience at a visceral level.

The piece called “We’re here because we’re here” has given hundreds of young people across the UK the chance to find out more about the Somme and in some cases discover the stories of family members who fought in the war.

The volunteers became ‘ghost soldiers’ taking on the personas of the real men who died on that day. Dressed in authentic First World War uniforms, they represented 15 of the regiments that suffered losses on that first day of battle. The men appeared unexpectedly in locations across the UK.

They walked the streets of Newcastle and Gateshead interacting with each other, but otherwise silent. They rested at the Monument, travelled on the Metro and ate their lunch outside the Sage and the Baltic in the newest most modern part of our city.

They marched across the Millennium Bridge and occasionally broke into song singing ‘We’re here because we here.’ This was the refrain the men at the front sang together, trying to keep up their spirits before battle. It made my skin prickle and a lump rise in my throat. It was a strong emotional reaction, I was very moved.

The faces of the lads in uniform, so similar to those local faces from a hundred years ago. I approached one the of the youngest. Private Hugh Lynch tipped his hat and gave me card with the name on it of the dead soldier he was representing.

This simple yet astonishing effective work, is partly inspired by tales of sightings during and after the First World War of people who believed they had seen a dead loved one.

Our ghost soldiers were representing the 24th (Tyneside Irish) Batallion Northumberland Fusiliers. I’m no fan of Derek Acorah but there was something very otherworldly about the whole thing.

The soldiers of the Somme

Nationally the soldiers took their intervention into people’s daily lives across the UK, from shopping centres, train stations, car parks and high streets. The volunteers were men aged between 16 and 52. This reflected the age range of the men who fought at the Somme. Not actors, but everyday people with a range of professions and backgrounds.

I knew quite a lot about this period of history as I had the lead role in the Accrington Pals. This play by Peter Whelan play, explores the lives of the women left behind at home after this devastating period of our history.

In conjunction with our very own Northern Stage, rarely have I seen something which merges theatre, visual art, history and contemporary society in such a simple, yet powerful way. I can only say well done to all involved with 1418NOW – you created something very special indeed.